Hubie and Rocko finally become friends after Rocko tells Hubie he was “amazing” for facing the danger of a sea-lion to recover the meteorite pebble. Arriving back in Antartica, they brave a sea of killer whales to reach Drake’s hideout, but Rocko supposedly sacrifices himself to allow Hubie to reach safety.

Inside Drake’s hideout, Marina still refuses to accept Drake as her mate, having pledged her love for Hubie. Hubie arrives to rescue her, but he is quickly beaten by Drake. Revived by the three bird children he lectured on love at the beginning of the movie, he starts round two and wins by using everything he learned from Rocko about fighting to knock Drake down a deep pit.

Rocko arrives, having survived the killer whales and reunites with his friend, but their reunion is cut short by Drake. In his rage, Drake unintentionally causes his hideout to collapse and cave-in. Rocko saves Hubie and Marina and finally makes his dream of flying come true by flying to safety with them. Drake isn’t so lucky, crushed and killed by the first falling rocks.

Back home, Hubie finally offers the meteorite stone to Marina who accepts, but also delivers the moral, “it’s the penguin, not the pebble that matters.” Hubie and Marina are married and the movie ends with Rocko taking some of their children on a flying trip. 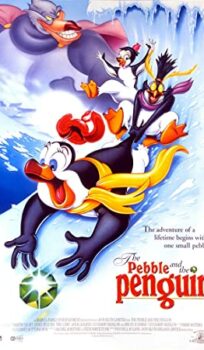