A young teacher (Kim Darby) takes a job in an isolated community.  The people from that community never leave their valley, and cling to old ways of doing things, like the Amish.  The children are not allowed to sing or play.  Everyone is serious all the time.  Adults make it clear that the teacher is tolerated because the government demands that the children be educated.

The teacher follows some students into the woods.  She discovers they have special abilities, like flying and moving distant objects.  One of the boys falls and breaks his neck.  The people use their abilities to guide the local doctor (William Shatner) in fixing his neck.

The people are from another planet.  Their planet was exploding and they landed on earth in the 1800s.  When their flying and other powers were seen, many of them were killed as witches.  They chose to live apart in this valley, hiding their abilities. The movie ends with the doctor and teacher agreeing to keep the secret, so the people will not be killed as witches or dissected by scientists. 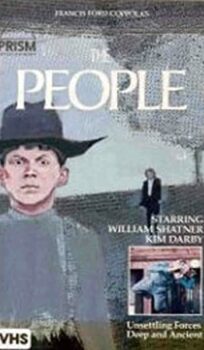