Submitted by Some Guy

A small group of people are holed up in a remote roadside cafe in the Arizona desert. Duke Mantee (Humphrey Bogart) and his gang have robbed a bank, killed some people, and are taking a break on their getaway. The cafe owners daughter, Gabrielle (Bette Davis) dreams of leaving this backwater to see Paris. Boze, who works pumping gas, wants her to marry him, but she does not want to be stuck there. Alan Squier (Leslie Howard) is a failed British writer who has become a hobo wandering America. Gabrielle wants to run off with Alan. He realizes she wants to escape her life, not necessarily be with this older man.

Boze grabs a gun and is shot in the hand by Duke. Inspired by his bravery, Alan decides to help Gabrielle. He signs an affidavit giving his life insurance policy to Gabrielle, and has the others witness it. He asks Duke to shoot him, so she can collect. Duke thinks it is all a joke.

Police surround the cafe, and there is a shootout. Duke and the gang try to make a run for their car. Alan blocks Duke from exiting, forcing Duke to shoot him. The bank robbers are shot on the run. Alan dies in Gabrielle’s arms, having given her the means to escape this desert and live the adventures she wanted. 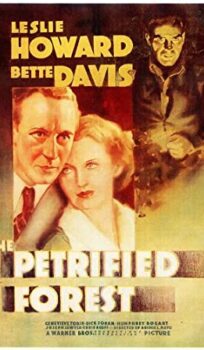