SHORT VERSION:
Drax gets the jade and silver skulls, which combine and show on a map that the gold skull lies in the Devil’s Vortex in the Yellow Sea. He, Sala, and his other cohorts head to the location with a captured Diana and find an uncharted island ruled by the Sengh Brotherhood. While bargaining for the gold skull with their leader, Kabai Sengh, Kabai reveals that a fourth skull exists that controls the other three.

Kit/The Phantom then appears and starts a battle, during which he kills Kabai, and then he beats Quill and takes back his late father’s Phantom belt. Drax gets the gold skull and combines it with the others and finds that they shoot a disintegrating laser. He accidentally kills Quill with it, and as he tries to use it on Kit, Kit reveals that the skull on his ring is the fourth skull. With its laser, he overpowers Drax’s laser and disintegrates him and the three skulls. This starts up explosions that destroy the lair, and he escapes with Diana and Sala, who had turned to good.

After showing Diana his lair and explaining the history of the Phantom, Kit takes her to a beach where Sala is waiting to fly her back home. Diana asks to see his face and then calls him by his real name, revealing that she always knew who he was. After removing his mask, he admits that he can only tell all of his secrets to one person: The woman he intends to marry. Diana kisses him goodbye and takes off with Sala. In a voiceover, Kit’s father laments Kit letting Diana get away, but he assures the viewer that Diana will come back one day soon.

LONG VERSION:
After Kit/The Phantom (Billy Zane) and Diana (Kristy Swanson) get the jade skull at the Museum of World History in New York City, Drax (Treat Williams), Quill (James Remar) and mob boss Charlie (David Proval) and his men confront them and force them to hand it over. Drax binds the skull together with his silver skull, and the skulls emit a laser to reveal to Drax on a nearby map where the gold skull is: On an uncharted island in a part of the Yellow Sea known as the Devil’s Vortex, where many ships have disappeared in the past. Drax has the skulls, Kit, and Diana brought to his office building, and Drax asks Kit why he wanted the skull, but Kit won’t say. After Quill punches Kit, he notices that Quill is wearing a Phantom gun belt. Drax has Quill and Charlie’s men take Kit up to the roof to make him talk while he gets the precise coordinates of the uncharted island, but Kit manages to get free of them, get his Phantom costume on, and escape.

As Drax is chatting with the corrupt police commissioner in the midst of his departure, Quill shows up to tell him that the Phantom is in the building. Drax tells the commissioner to tell his men that Kit is a madman and must be shot on sight. Drax then leaves for the skyport at the docks, intending to fly to the island in his seaplane with Quill, Charlie, and Sala (Catherine Zeta-Jones), and Diana is brought along as their “Phantom insurance.” Kit escapes the police and makes it to the docks (and along the way, the ghost of his father confirms to him that Quill had killed him and took his belt), and he sneaks onto Drax’s plane just before take-off.

The villains and Diana reach the island and head into a mountain cave, with Kit silently following them, and they all discover that inside the cave lies the lair of the Sengh Brotherhood. After Quill shows his Brotherhood tattoo to some members, they are brought before the leader Kabai Sengh (Cary Hiroyuki-Tagawa) and they see that he possesses the gold skull. When Kabai demands to know why Drax and his party are here, Drax shows him the two skulls that he has and tells him about what he knows about the skulls and their power. He then offers Kabai a partnership, but Kabai refuses with disgust, saying that he has no bargaining power with him, plus he doesn’t have the previously unknown fourth skull that controls the power of the other three. He then signals for his men to do away with him, at which point Charlie turns on Drax and tells Kabai to let him go or else he’ll shoot him, but Kabai blows him away with a cannon.

Quill shows his tattoo to him and tells him that he has killed the Phantom, but Kabai replies that many Phantoms have been killed in the past, but he keeps coming back. Drax then brings up how Diana is the Phantom’s girlfriend, and then he offers him Diana for the gold skull, saying that she can be used in some way to help get rid of the Phantom. Kit then emerges from hiding and starts attacking Kabai and his men. Sala – who had decided to turn to good along the way – and Diana help him with this task, and Drax and Quill take the skulls they have and run. Kabai’s men are defeated, and Kit ends up making Kabai fall into his shark-infested moat, where he gets devoured. Kit, Diana, and Sala incapacitate the rest of the Brotherhood, grab the gold skull, and start looking for Drax and Quill.

The trio enter a chamber that houses a small submarine armed with torpedoes (which is what the Brotherhood has been using to sink any ships that discovered their island, thus creating the legend about the Devil’s Vortex), and Kit has the ladies go into the sub with plans to safely shoot them to the surface in a path where they will hit nothing. He finds a path using the periscope, but just as he is about to launch them, Quill attacks him from behind, making him drop the gold skull. As they fight, Drax gets the skull, and all of the skulls levitate and join together, and Drax grabs them and finds that they shoot a lethal laser beam. Kit defeats Quill (during which Diana and Sala get launched out of the chamber) and takes his father’s belt back from him, and as Quill yells to Drax for help, Drax accidentally zaps him with the laser and disintegrates him. As Drax gloats about how powerful these skulls are and that he doesn’t need the fourth one, Kit reveals that the fourth skull is the skull on his ring. As Drax fires the laser at him, a laser comes out of the ring that is powerful enough to stops Drax’s laser, and they have a beam fight until Kit’s laser overwhelms Drax’s and disintegrates both him and the three skulls in a fiery blast. The blast causes the whole lair to start blowing up and kill off the rest of the Brotherhood, and Kit grabs the chain attached to the sub and escapes before the lair is completely destroyed.

Still in his Phantom mask, Kit takes Diana to his hideout and explains the whole story of the Phantom: The mantle has been passed down from father to son for the last 400 years, and he is the 21st Phantom, having taken up the mask after the death of his father. No one outside of a few trusted people know of this, hence the whole legend about the Phantom being immortal. He then takes Diana to the beach where Sala is waiting to fly her back home. Diana asks for Kit to take off his mask, and calls him by his name, revealing that she knew all along who he really was. Kit removes his mask, but tells Diana that he can only reveal all of his secrets to one person: The woman he intends to marry. Diana kisses him goodbye and then flies off with Sala, and she watches Kit riding off on his horse through the jungle. In a voiceover, Kit’s father expresses his disappointment over Kit letting Diana get away, but he assures the viewer that Diana will return to Kit one day soon. 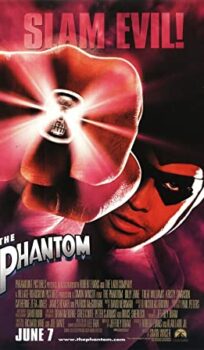