Erika is an Austrian piano teacher who lives with her domineering mother.  She harbors extreme sadomasochistic desires.

Her student, Walter, pursues her romantically.  At first she spurns him but eventually she gives in to his advances.

Erika reveals her sexual fantasies to Walter, who is revolted; his disgust and rage drive him away, but he returns to beat and rape her in her home.  Erika receives the treatment she had desired, but feels nothing in response.

She stabs herself in despair after Walter abandons her. 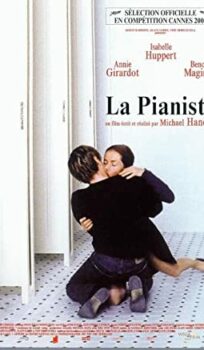