SHORT VERSION
Clouseau is framed as The Phantom and sent to prison. Despite losing The Pink Panther diamond, Charles, Simone, and George get away with everything and plan to continue to steal diamonds.

LONG VERSION
The movie opens with the Shah of Lugash presenting his daughter Princess Dala with The Pink Panther, the largest diamond in the world. The diamond contains a flaw that, when held up to a light, appears to be a leaping pink panther. Several years later, rebels seize control of Lugash and demand the return of The Pink Panther. The now-adult Dala (Claudia Cardinale) refuses to hand over the diamond and flees the country.

On the trail of The Phantom is the clueless and clumsy French police inspector Jacques Clouseau (Peter Sellers). Clouseau, convinced that The Pink Panther will be The Phantom’s next target, travels to Cortina with his wife Simone (Capucine). Clouseau is correct that The Pink Panther is a target for theft, and throughout the movie, he attempts to protect the diamond and apprehend The Phantom, bumbling and stumbling along the way. What Clouseau doesn’t know is that his wife Simone is Litton’s accomplice and lover, and she is warning Litton of every move Clouseau makes.

At an elaborate costume party, Charles and George, both wearing gorilla suits, steal the diamond, and that’s when their real identities and motives are revealed. Clouseau and the local police chase Charles and George through the streets of Cortina, all wearing costumes. Eventually, Charles and George are captured. At their trial, with conviction looking inevitable, Charles and Simone concoct a planto frame Clouseau. He is called as a surprise defense witness, and while the barrister is suggesting that Clouseau himself is The Phantom, he finds the diamond in his pocket that Simone (who had the diamond all this time) planted on him. The case against Charles and George is dismissed, and Clouseau is arrested as The Phantom. With Clouseau off to prison, and The Pink Panther diamond now in police custody, Charles, Simone, and George get away with everything. Now as partners, they plan to continue to steal diamonds. 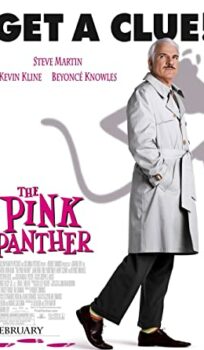