Most of the assassins sent to kill Chief Inspector Clouseau (Peter Sellers) accidentally kill each other when they all converge on him at Oktoberfest. Another kills an over-ambitious henchman of Dreyfus’ (Herbert Lom) who wanted to dispose of Clouseau himself and was disguised as the detective. One final assassin, the lovely Olga (Lesley-Anne Down), actually beds the former (in a darkened room) thinking HE is Clouseau – and falls in love with the confused real Clouseau as a result.

The dead henchman has a tattoo that leads Clouseau to the castle Dreyfus and the disintegrating laser are hidden away in, but it’s impossible to sneak into – until Dreyfus, suffering from a toothache, needs the services of a dentist and Clouseau poses as one. Alas, he accidentally reveals his true identity when he pulls the wrong tooth.

The enraged Dreyfus plans to use the laser on England and Clouseau attempts to stop him by swinging his way by rope, which doesn’t work – in fact it lands him outside – but when he defeatedly sits down, it’s on an old catapult, and a goat is just nibbling away at the ropes holding the arm ready…Clouseau is thrown atop the laser; it malfunctions and zaps Dreyfus, and progressively the whole castle, away. Everyone else manages to flee.

Clouseau returns to his apartment in Paris to find Olga waiting for him, but their romantic moment is interrupted when always-at-the-ready Kato attacks him, causing the Murphy-bed they’re all in to fly up and backwards, sending them through the wall and into the River Seine. 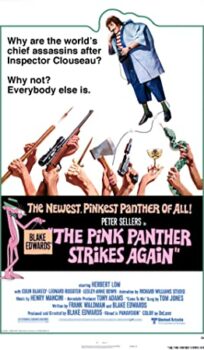