Nicholas (Vincent Price) imprisons Elizabeth (Barbara Steele) in the metal box and chases Bartolome (Charles Victory), who falls to his death.  Nicholas ties Francis (John Kerr) down and attempts to kill him with the pendulum.  Maximillian (Patrick Westwood) fights Nicholas, who also falls to his death next to his brother Bartolome.  Maximillian and Catherine (Luane Anders) save Francis before he is sliced by the pendulum.  As they leave the torture chamber, Catherine says no one will enter the room again.  The camera flashes to Elizabeth, bound and gagged in the box with a look of terror in her eyes. 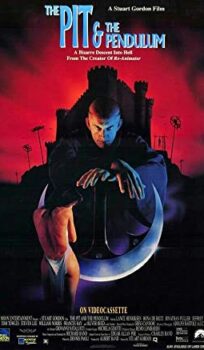