Griffin (Robbins) is not caught for murdering (in semi-self-defense) David Kahane (the writer he thought, erroneously, had been sending him death threats), though the Pasadena police remain convinced he was the perp.

He ditches his girlfriend for June (Scaacchi) the murdered writer’s girlfriend who, ludicrously, falls for him about two days after the murder. Griffin also takes over the studio, assures that the annoying “real” movie about death row gets the full Hollywood treatment with Bruce Willis and Julia Roberts, lets his ex-girlfriend get fired when she protests, and lives happily ever after with June.

At the end of the movie, the mysterious writer that had been threatening Griffin, the writer who was not Kahane, is put on the phone by Levy (Gallagher) and pitches a movie to Griffin that tells the story of what happened with the murder and it’s called The Player.

The writer makes clear that he’s blackmailing Griffin, who happily greenlights the movie. 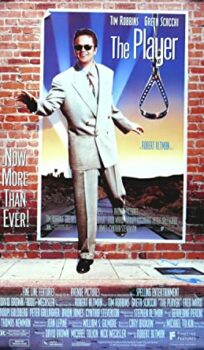