One night, Alex (Brett Davern) asks Roger (Matthew Lillard) why he dropped out of Harvard after his freshman year, and he replies that he found that he was spending too much time studying and working and not enough time having any fun. A few nights later, while they are out dining with their escorts and their friend Hector (Efren Ramirez), Hector spots the beautiful wealthy widow Mrs. Ashmore (Darla Haun) – whom he has a huge crush on – sitting nearby, so he approaches her and puts the moves on her. She responds positively to his overtures, and they later become a couple. Alex also continues to develop the mutual attraction he has with the escort Laura (Rachelle Lefevre).

The following day, Alex, Roger, and the prostitutes make up the Stensons’ mansion to look like they haven’t been running a brothel out of it since Alex is supposed to have an interview later on with Mr. Tucker (Michael Boatman) of the Westington Scholarship Committee. Unfortunately for them, the Stensons return home early from their vacation, and Mr. Stenson (Robin Thomas) quickly figures out what the guys have been up to in his absence. He soon finds all the money that they have made and takes it as “rent” in exchange for him not notifying the authorities about what they’ve done. Mr. Tucker then shows up, and Mr. Stenson chats with him and gives him the full story of what Alex has been doing in his home, which causes Alex to be denied the scholarship. That night, as Alex, Roger, and Laura are about to leave the mansion, Roger apologizes to the others for what happened today, but Alex acts like he couldn’t care less about failing to get the scholarship and losing his chance to attend Harvard. This upsets Laura and causes her to drive away without saying goodbye, and Roger tries to tell Alex that it is important for him to go to college and land a good career, saying that the life he leads is a road to nowhere. Alex yells that he isn’t going to listen to him because he has lied to him for years, and he adds that, had he have been man enough to admit that he was a pool boy, he never would have come out here because he would have never spent his entire summer with a loser. Alex then walks over to the bus depot and sleeps there so he can catch a bus back to Michigan in the morning.

Shortly after he wakes up, he gets approached by Roger’s weed dealer Eddie (Joe Reegan), who tells him that he has learned Spanish and made a big marijuana deal out of Oaxaca, and he credits him saving his life earlier on for giving him the motivation to improve his lot in life. Unfortunately for Eddie, he is apprehended moments later by D.E.A. agents. After this, Alex decides that he can’t be carefree and reckless like Eddie, so he finds Roger at his favorite bar. He first apologizes for insulting him, then tells him that he isn’t going back to Michigan with his tail between his legs and proposes that they host a huge party with all of the girls and clients and make a sum of money large enough to cover three or four full Harvard tuitions. Roger then suggests that they make enough cash to cover two full tuitions, great housing, and books, and explains that the higher-ups at Harvard had told him before he left that he was welcome to return whenever he wanted to, and he has decided that he wants to go back. They then find Laura and tell her all about their plan so she can get all of the escorts together, but not before she and Alex have a passionate kiss. They then visit Mrs. Ashmore to get her permission to hold the party at her mansion, and she happily obliges them.

While the shindig is in full swing (during which Mr. Stenson’s wife Caitlin [Jennifer Walcott] and Tom Arnold [himself] both make an appearance, in addition to Eddie, who got bailed out of jail by his lawyer father), Roger receives a call from Alex’s father Marty (Jay Thomas), and he tells Marty that the noise he is hearing is just a “Harvard soiree” that he is holding for Alex. Marty tells Roger that he and his wife Nancy (Rhoda Griffis) are in Los Angeles right now and have a long layover until their next flight, so they want to come and pay him and Alex a visit. Roger provides the address to the mansion off-screen, and after he gets off the phone and warns Alex and the girls about the impending visit, he convinces them to help him create a façade of this party being a Harvard party. He also manages to get all of the partygoers to agree to help him with this and coaches them some lines to say as part of it. Alex’s parents show up soon after, and Marty mentions to Alex that they brought some old alumni along with them. Eddie gets stoned with one of said alumni, who turns out to be the dean of the Harvard Business School, and he impresses the dean so much that he is instantly accepted into it.

The party eventually gets out of control when Alex heads down into the basement and finds a client of one escort dressed in a gimp costume and a client of another escort dressed as a unicorn battling it out over usage of the space. While he attempts to separate the two, Tom Arnold appears and sees the clash unfolding, so he gets everyone upstairs to come down and watch it while he takes bets. Roger knocks on one of the basement windows to try to get their attention and make them stop, but they just ignore him. Alex then gets physically provoked by the unicorn man and winds up squaring off with him, and he quickly knocks him out with one blow from a rubber fist he uses. Alex’s parents then appear and demand an explanation, after which Roger falls through the window and lands inside. Alex admits that he is a pimp and that he and Roger started up an escort service, but Mr. Stenson extorted them out of their earnings and then busted him to the Westington Committee, so he and Roger threw this party to earn back their tuitions. He also confesses that Roger dropped out of Harvard and became a pool cleaner. His parents soon come to be accepting of the situation after realizing that nobody has gotten hurt and the police haven’t come, plus Alex takes full responsibility for his mistakes and he assures them that he and Roger have made enough money for their tuitions. Marty admits that this party is better than any Harvard party he has ever attended, so he tells the crowd that the drinks are on him. Everyone cheers, and Alex and Laura kiss.

Later on, Mr. Stenson shows up looking for Caitlin and confronts Roger about it, and Roger points out that she is topless in the pool with one of the partygoers right now. He also points out his daughter Bethany (Rachel Rogers) playing the bongo drums with Eddie and his new stoner pals. He takes photos of them both on his phone and then blackmails Stenson into giving him back the money he took in return for him not sending the photos out to all of his pool-cleaning clients and tarnishing his image. After the party ends, Alex and Roger see off Marty and Nancy, and as Alex converses with his mother, he mentions that he is a virgin, and she suggests that he do something about that before college starts. Alex and Roger then hang out with Hector, Mrs. Ashmore, and the escorts, and after Roger expresses his disappointment over how this business is going to end now that he and Alex are going off to Harvard, Hector tells him that he will gladly continue to run it himself. Roger then goes somewhere private with the beautiful deaf DJ after she sexually propositions him, and Alex and Laura also have sex since he is now no longer a pimp.

The next scene shows that Alex and Roger are now Harvard students, and Roger narrates that Laura left the escort business for good, came to Boston with them, and used the money she had been saving up to open her own day spa. As Alex and Roger are walking around the campus, Eddie suddenly appears before them and thinking that their escort service is still in operation, he tells them that there is a party coming up this Friday that he needs some girls for, plus a lot of alumni are going to be coming in for a sports game on the weekend and he has already sold them copious amounts of Viagra, so some women will be needed for that, too. The guys try to tell Eddie that they can’t fulfill his requests, and a professor who overhears this tells Eddie that they most certainly can’t….because they need every girl they’ve got for the faculty mixer. After Eddie and the professor walk off to talk some more about it, Alex and Roger get to discussing the possibility of starting up another escort service here, since there is clearly a demand for it and it could be quite profitable given the number of rich people here. 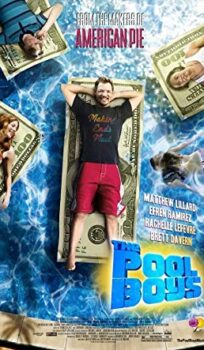