The Pope of Greenwich Village(1984)

Because Pauly (Eric Roberts) left his fingerprints at the scene, local mafia boss Eddie (Burt Young) learns of his involvement in stealing the $150000 intended for corrupt cops. Eddie cuts off Pauly’s thumb, and – to add insult to injury – forces him to work as a waiter in his club. Pauly reveals that irish safe opener Barney (Kenneth McMillan) was part of the heist, but doesn’t tell about his cousin Charlie (Mickey Rourke). Barney is able to escape to Chicago.The Pope of Greenwich Village (1984)

Diane (Daryl Hannah) leaves Charlie and steals $45000 of his share of the money, thus leaving him with only $5000.

Pauly’s reacehorse doesn’t win, it only gets in second. Pauly loses all his money, but Charly wins $20000 because he had made a place bet. On their way back from the racetrack, Pauly tells Charlie that he did tell Eddie that Charlie was involved in the heist. However Charlie has a tape that he took at the heist, and this tape has details about Eddie bribing the cops. Charlie walks into Eddie’s club and tells that he has the tape, and thus he is the “Pope of Greenwich Village”. Pauly serves a coffee for Eddie – with hydrochloric acid. Eddie storms out of the club, and the two walk away with their $20000 and tickets to Miami. 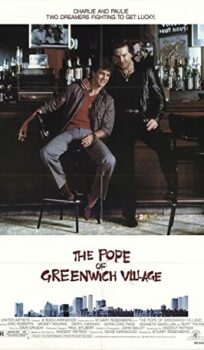