Short pooper:
Phil (Benedict Cumberbatch) dies of an anthrax infection obviously caused by the contaminated rawhide provided by Peter (Kodi Smit-McPhee) to complete the lasso. It is strongly implied, but not openly stated, that Peter did it on purpose to rid the house off Phil’s ignominious presence, even though it looked like Phil was treating him better by the end.

Longer version:
Rose (Kirsten Dunst), Peter’s mother, falls into full-blown, debilitating alcoholism that worsens over time, when she sees that Phil has taken the young man under his wing. Meanwhile, Phil, who seems to have taken a genuine liking to Peter, teaches him to properly ride and offers to plait a lasso for him. One day, Phil wounds his hand while trying to kill a rabbit caught under posts he intended to use for fencing and pays no attention to it, despite Peter mentioning it.

In the middle of one of her drunken binges, Rose defies Phil’s rule of throwing away leftover rawhides and gives them to the Shoshone tribe of the area, before collapsing, ill. When Phil finds out, he wants to lash out angrily at Rose, but George (Jesse Plemons) demands him to back off. Peter, seeing this, gives Phil the rawhide he had cut before from that dead cow -without mentioning that it was diseased, the reason for which he handled it with gloves!!-. This touches Phil and they work on finishing that lasso; but Phil, oblivious to it, washes his hands -even with that open wound and all-in the same water where the contaminated hide was soaking, thus exposing himself to the same infection.

Peter confides in Phil how he found the corpse of his father -who had committed suicide- and Phil, in turn, confides in Peter how Bronco Bill, during a job cut short by bad weather, saved his life by spooning with him in a bedroll, to warm him up. Peter asks if they were naked, to which Phil just stares at him (this suggests two possibilities: one, that Peter might’ve wanted to know, out of scientific curiosity; or two, that, because of having previously caught Phil pleasuring himself with a scarf and having discovered his secret stash of gay pornography, Peter wanted to confirm if Phil was secretly gay and was just trying to make a pass at him, at that moment; the way they both share a cigarette right after, in a visibly homoerotic way, seems to confirm the latter).

The next day, noticing Phil’s absence, George goes back to their room and finds him still in bed. When he makes him wake up, notices that Phil is visibly ill and the wounded hand has evolved into a bad infection. Phil, seeming out of himself, wants to give Peter the lasso, but George does not allow it and, instead, takes him away to town, to be seen by a doctor. Later, George is seen choosing a casket for a funeral and Phil is shown to have died. The doctor (Stephen Lovatt) reveals that the cause of death was anthrax, which shocks George, since he was positive that Phil never dealt with diseased animals. Rose is approached by Phil and George’s parents (Keith Carradine, Frances Conroy); Mrs. Burbank gives Rose a handful of jewelry, an obvious family heirloom, thus being regarded as a member of the family.

Peter, who had stayed home, gets a hold of a prayer book, where he comes across Psalm 22:20 (“Deliver my soul from the sword; my darling from the power of the dog”). This gives the idea that his deed could have had the connotation of a divine mandate. The movie ends as he sees, through the window, the arrival of his mother and George, who comfort each other and kiss. He turns away with a slightly unsettling smile. It is open to interpretation that Peter, fed up with Phil’s abuse and odious presence, might have carefully planned his demise by poisoning Phil with that anthrax-laden rawhide at the perfect opportunity and no one would ever suspect him; furthermore, he is seen carefully hiding the lasso, from everyone’s view, under his bed. 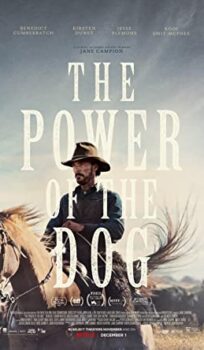