A Fugitive Predator crash lands on Earth after being pursued by a larger, upgraded Ultimate Predator. The first Predator is taken by scientists from Project Stargazer, led by Will Traeger (Sterling K. Brown). He brings in biologist Casey Bracket (Olivia Munn) to determine that the Fugitive Predator had human DNA, right before it escapes when the Ultimate Predator’s ship is detected to be heading to Earth.

Sniper Quinn McKenna (Boyd Holbrook) is placed with a group of government captives – Nebraska, Coyle, Baxley, Nettles, and Lynch – after a failed hostage rescue in Mexico where two of Quinn’s teammates were killed by the Fugitive Predator. Quinn had sent some recovered Predator gear back to his home, which is found by Quinn’s son Rory (Jacob Tremblay). Rory unintentionally triggers the signal to alert the Predators to his whereabouts. Quinn and the gang (now joined by Casey) find Rory and save him from Predator Dogs, but just as they are found by Fugitive Predator, Ultimate Predator eviscerates the other alien as the humans get away.

Ultimate Predator takes Rory with him, believing the boy to be the next step in their evolution. Quinn, Nebraska, and Nettles hop on the ship to stop him, but Nettles falls to his death, and Nebraska sacrifices himself to bring the ship down. With Casey’s help, Quinn defeats and kills Ultimate Predator.

It’s revealed that Fugitive Predator was carrying a Preadator Killer armor that Quinn hopes to use. 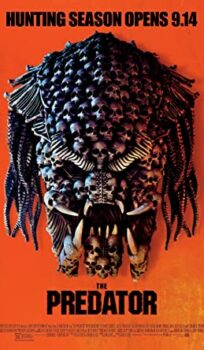