Robert Angier (Hugh Jackman) did not die while performing the Transported Man. The machine which Tesla made for him would create a duplicate in his place, then transport him to another location (the back of the theater). The water tank was placed under the trap door in the stage in order to catch and drown each of the duplicates. Blind stage hands were hired so that they would not see what was happening and Cutter was kept away from the backstage area to keep him from learning the secret. Angier’s real name is Lord Cordlow, and he staged his own murder in order to frame Borden (Christian Bale) and get revenge. He then played on Borden’s desperation by offering him financial assistance (from the mysterious Lord Cordlow) in exchange for the secrets to all of his tricks and the custody of his daughter (the things that meant the most to him).

Cutter (Michael Caine) confronts Angier about his deception and helps him move the Tesla device to the old burned out theater, where Angier promises it will stay, never to be used again. The film then cuts to Borden’s execution. He briefly talks to his mysterious (previously mute) assistant, who then speaks the word “Goodbye”. Shortly before being hung, Borden says “Abra Cadabra”. The film then cuts back to the old theater, where Angier is surprised by a bouncing ball. He turns around and is shot. A figure emerges from the shadows and reveals himself to be…. Alfred Borden. Borden reveals that he has had a twin brother and they have been living their lives as one person (Alfred Borden) while the other disguised himself as Borden’s mute assistant. To keep the illusion alive, they even cut the brother’s fingers off to match the injury that Alfred suffered during the failed bullet catch. Borden confesses that he wasn’t actually cheating on his wife. One of the brothers honestly loved the wife and the other fell in love with the assistant. Borden also reveals that he was simply using a double (his brother) to perform the Transported Man (exactly the way Cutter had suspected the trick was performed). As he’s dying, Angier accidentally kicks over a lantern and sets fire to the theater. Borden walks away.

The film then cuts to the earlier scene of Cutter teaching the little blond girl (Borden’s daughter) about the three stages of a magic act. Right after he explains the part about how the trick isn’t complete until the vanished item is brought back, we see Borden walk into the room. He then hugs his daughter.

Lisa G disagress and adds…
The original Robert Angier DID die – there’s no avoiding that fact.  Because: 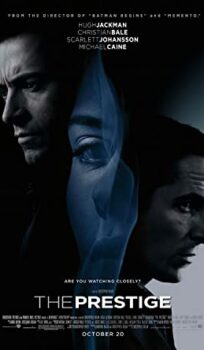