After the Ten Plagues wreck havoc upon the Egyptian population -particularly the tenth one, which implied that every firstborn of animals AND MEN should die-, Rameses (Ralph Fiennes), stricken by grief upon the death of his own son, announces to Moses (Val Kilmer) that he would free the Israelis; however, he doesn’t want to have anything more to do, personally, with Moses.  This appalls Moses deeply.

Shortly after, though, Rameses reconsiders his position in regards to the Israelis, and, angry, orders his entire Army to follow and seize the Israelis, who were already fleeing Egypt.  Meanwhile, Moses’ people come to the shore of the Red Sea, not knowing what to do, and then, the Egyptian Army is heard roaring behind them.  Moses asks God to illuminate him, and then, he slams his stack over the floor and raises his hands, thus causing the sea to split into two gigantic columns of water and leaving a trail of dry land below, for the people to walk through (truly a majestic sequence!!); at the same time, an enormous whirlpool of fire arises from the ground, to prevent the Egyptians from reaching the Israelis, but it doesn’t last too long.

Just seconds after the last Israeli has reached safely the other shore, and the Egyptian soldiers have started to walk through the same created path, the two “towers” of water collapse on them.  The entire Army dissapears in the sea, except for Rameses, who gets blown away back to the Egyptian shore.  He is left alone and infuriated, screaming: “MOSES!!!!”, while Moses whispers: “Good-bye, brother”.

In the end, Moses, Tzipporah (Michelle Pfeiffer), Miriam (Sandra Bullock), and all the Israeli characters survive, while looking at their vast new land to establish on.  Then, the voice of Yocheved, Moses’ mother, is heard, chanting: “Deliver us!”, and the credits roll at the rhythm of the song “When You Believe”. 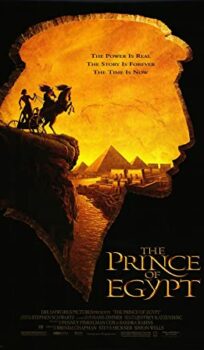