After Victor (Michael Wright) and his gang badly beat up Emile (Troy Winbush) for quitting the gang and warming up to Rick (James Belushi), an enraged Rick confronts Victor and tells him that, while he can’t get him sent to prison for what he did to Emile since nobody saw him do it, he IS going to catch him, and he will wish he were in prison when he does. Victor threatens to kill him if he shows up to school tomorrow.

Unafraid, Rick shows up the next day, and a short time after classes end for the day (though the students stick around outside awaiting the inevitable confrontation between him and Victor), Rick and Jake (Louis Gossett, Jr.) spot Victor and his thugs making their arrival. Jake tells Rick to call the cops while he chains up the front doors. Unfortunately, Rick discovers that the phone lines are dead, and one of the thugs locks up Jake in a supply room so he can’t assist Rick. The other thug lures Rick into the girls’ shower room, and Victor and the first thug show up soon after, and they commence with a twisted game of hide-and-seek with Rick. Jake manages to bust his way out of the room, so Victor sends the first thug back to deal with him. Jake and the thug tussle until Jake causes him to fall over the side of a stairwell, and he dies upon hitting the ground.

Meanwhile, Victor catches Rick, and he orders the second thug to kill him. The thug refuses, saying that he isn’t doing life in prison for anyone, and if Victor wants him dead, then he’d better kill him himself. Victor shoots and kills the thug for his defiance, but before he can shoot Rick, Arturo (Jacob Vargas) surprise attacks him and knocks the gun from his hand. The momentary distraction enables Rick to start a fight with Victor, and they fight all the way to the front doors, where Rick wins by throwing him through the doors to the ground outside in full view of the students. As a minor scuffle starts between a few enemies and friends of Victor’s, Rick yells “NO MORE!”, which makes them stop.

The cops come and take Victor away. One student derisively asks Rick “Hey man, who in the hell do you think you are?”, and Arturo yells back “He’s the principal, man!” which Rick proudly repeats. He then heads home on his motorcycle. 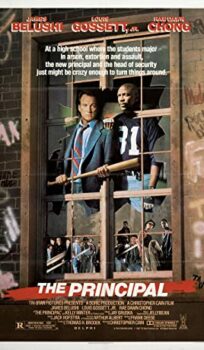