Millionaire Texas rancher/oilman J W Grant (Ralph Bellamy) contracts 4 “professionals” to rescue his wife Maria (Claudia Cardinale), who has been kidnapped and is being held for ransom by Mexican revolutionary Jesus Raza (Jack Palance) at his hacienda deep into the Mexican desert.

The 4 professionals, Rico (Lee Marvin, leader and firearms expert), Dolworth (Burt Lancaster, explosives), Jake (Woody Strode, tracker and longbow) and Ehrengard (Robert Ryan, pack master and horse wrangler) make an explosive and dramatic rescue of Maria and make a dash back to the border with Raza and some of his men in hot pursuit.  In the course of the rescue, they learn that Maria was not kidnapped by Raza but is his longtime lover.  As such, she tries to escape, seduce them into letting her go, bribe them and even kill them without success.

A wounded Ehrengard has slowed them to the point that Raza will overtake them before they reach the border.  Dolworth elects to stay behind in a narrow pass and delay Raza and his men long enough for Rico and the rest to make the border and fulfill their contract.  Dolworth manages to kill all of Raza’s men and severely wound Raza.  Rico and the rescue party reach the border but hesitate to cross in the hope Dolworth somehow made it out.  Dolworth shows up shortly with a wounded Raza in tow.  J W Grant shows up joyous that they have returned his wife, but Maria informs him that her “rescuers” know everything.  Grant tells his men to kill the wounded Raza but decides better of it when Rico puts a gun to Grant’s head.  Rico tells Grant he now realizes the ransom note was a fake and used as a ruse to get them to bring his wife back.  Their contract was to rescue Mrs Grant from a kidnapper, but it just so happened that the kidnapper was J W Grant himself.  They load Raza into Grant’s buckboard wagon and Maria drives it full speed back into the desert.  J W Grant is really pissed at losing his wife again but can’t do anything about it.

The 4 “professionals” ride off together back into Mexico. 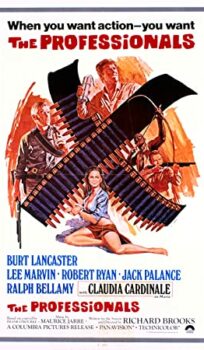