Pooper:
Mikael and his niece Yeva escape from the Ottoman Empire’s genocide of the Armenian people (the rest of his family are killed). Chris also makes it out alive, but Ana dies during the escape.

Long Ending:
Loosely based on the rescue of Armenian survivors on Mt. Musa Dagh.

Mikael (Oscar Isaac) is an Armenian from a small village within the Ottoman Empire during World War I. He becomes engaged to a wealthy neighbor’s daughter so he can use the dowry to attend medical school in the Empire’s capital, Constantinople. Upon arrival, he moves in with his aunt’s family, including his nieces Yeva and Tamar. He soon befriends his niece’s dance instructor, an Armenian named Ana (Charlotte LeBon) and her boyfriend, an American journalist named Chris (Christian Bale). He also befriends a Turkish medical student named Emre (Marwan Kenzari), whose father is a wealthy businessman supporting the Ottoman Empire’s war efforts (Turkish Muslims were the majority of people in the Ottoman Empire).

Mikael often hangs out with his three friends, and he and Ana eventually start falling in love and have an affair (which Chris soon discovers). As the war progresses, the Ottoman Empire begins a process of “relocating” its Armenian and Christian minorities. Mikael is spared from persecution several times by Emre, much to Emre’s father’s disgust. Eventually, when trying to bribe the authorities to release his uncle from prison, Mikael is arrested and sent to a torturous labor camp. Emre (who tried to help) is forced by his father to join the military. Mikael’s aunt and nieces seek shelter with Ana and Chris. Chris also risks his life to report on the genocide. Ana and Chris appear to patch their relationship up.

Mikael manages to escape the labor camp and make his way home. Once there, he marries his fiancée and they live in a secluded cabin in the woods. When Mikael’s wife gets pregnant they return to their village where Mikael is also reunited with his aunt and niece. They tell him that Ana and Chris accompanied them to Mikael’s hometown so they could be reunited with their family. Ana and Chris are now working at a nearby Christian orphanage. Mikael visits them at the orphanage and tells them he is married (thus recognizing that Chris belongs with Ana). Ana tells him they are taking the orphans to a seaside town where boats are waiting to evacuate them from Ottoman territory. The friends agree to stop by Mikael’s town so they can also get his family to escape with them.

When they arrive at Mikael’s hometown, they find that the Ottoman authorities have slaughtered almost everyone. Mikael’s father, aunt, niece Tamar, and his wife and unborn child are found dead. His mother and Yeva are alive, but his mother is wounded. They are then pursued by the authorities, and Chris serves as a distraction so that the rest of the orphans and Mikael’s family can flee. Chris is captured and jailed. He sees Emre (now a guard at the jail) and begs him to get in touch with the American embassy. Emre refuses, but several days later, the American ambassador arrives (small role for James Cromwell) and secures Chris’ freedom. The Ottoman authorities eventually learn that Emre did contact the ambassador and they execute him as a traitor. After being freed, Chris manages to secure passage on a French naval ship (a small role for Jean Reno) to continue covering the war.

Meanwhile, Mikael, Ana, his family, and the orphans arrive in the town to learn that the Armenians destroyed all the rescue boats and are forcing the Armenian town to evacuate. The mayor of the Town and Mikael convince the townsfolk to set up camp at Mt. Musa Dagh rather than go the location they were ordered to go to by the Ottoman authorities (where they would likely be jailed or killed). While there, Mikael’s mother dies, but not before giving her blessing to Mikael and Ana (who still clearly have feelings for one another). The Ottoman military eventually attack the Armenian settlement on Mt. Musa Dagh. Though the Armenians manage to successfully repel the first assault, they know its a matter of time until the Ottomans return in full force. Mikael is able to put his medical training to use during the battles.

The Ottomans pursue the Armenians over Mt. Musa Dagh in hopes of pinning them against the shore and slaughter them there. The Armenians manage to attract the attention of a nearby French ship (the same ship Chris is on). The French soldiers (and Chris) disembark and begin ferrying the Armenians to safety on their ship while under fire by the Ottoman forces. As the main characters are being ferried to the ship, an artillery shell lands nearby and tips over their boat. Mikael tries to save Ana, but she drowns before he can get to her. Mikael does save his sole surviving family member, Yeva. They (and Chris) make it to the boat and, with the rest of the survivors, are taken out of the Ottoman Empire.

Many years later, the film jumps to America where Mikael now lives. Chris helped he and Yeva emigrate to America, where Mikael adopted his niece. Yeva is now getting married, volunteers to support the American efforts in World War II, and has invited the other surviving Armenian orphans to her wedding. Mikael gives a toast, saying the Armenian people can never be killed and that survival is the best revenge (which was a sentiment Ana maintained throughout the film). The film closes with title cards that state, amongst other things, that Turkey has never recognized the genocide of the Armenian people. 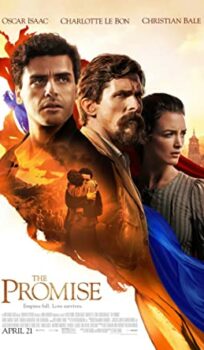