Margaret (Sandra Bullock) is going to be deported so she blackmails her assistant – Andrew(Ryan Reynolds) to marry her. They go to the INS office and set up and interview for the following Monday – the INS guy thinks they are trying to pull a fast one and is wary of them.

That weekend they go to Alaska for Andrew’s grandma’s 90th Birthday party and to tell his parents about the engagement. They plan to spend the weekend getting to know each other well enough to pass the interview.

Andrew already thinks he knows everything about his boss and she knows nothing about him. Over the course of the weekend they have a few moments and you can tell that they are starting to have feelings for each other. Andrew’s parents suggest they get married the next day. Andrew’s father calls the INS guy out to Alaska and he tries to make a deal with Andrew so he won’t go to prison. Andrew refuses.

They get everything set up for the wedding and halfway through the ceremony Margaret stops it and confesses that the whole things was a scam to try and get her to stay in the country. She leaves and her and the INS guy head to the airport – she will be deported the next day.

Andrew realizes that he loves her and heads to the airport with his family after his grandma fakes a heart attack to get lifeflighted to the airport and get the ball rolling. Andrew misses Margaret at the airport.

The next day she is at work packing up her office and Andrew comes in – he tells her he loves her – he asks her to marry him so he can start dating her. She eventually agrees and they kiss in front of the entire office.

During the credits the INS guy (off camera) is asking them a bunch of ridiculous questions. 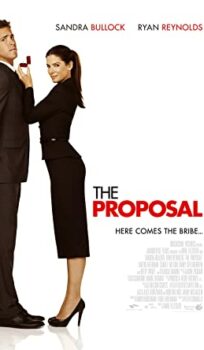