Chris Dubois (Jean-Claude Van Damme) wins the tournament, defeating the Mongolian fighter Khan (Abdel Qissi) in the finals in a brutal match. He does not get the victory prize “a solid gold dragon” when he wins because he traded it for the lives of Dobbs (Roger Moore) and Harry (Jack McGee), who were sentenced to death because they attempted to steal the dragon. Chris, Maxie Devine (James Remar), and Carrie Newton (Janet Gunn) return to New York City.
In the narration from an older Chris, he said he got the kids off the streets, Maxie would become a trainer of many great fighters, and Dobbs and Harry opened a trading post deep in the Amazon. Carrie would publish a book of Chris’ adventures, called The Quest. 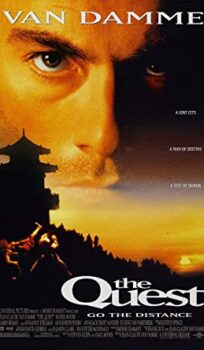