Sean Thornton (John Wayne) returns to Innisfree, the Irish town where he was born, after spending most of his life in the United States. He falls in love with Mary Kate (Maureen O’Hara), the sister of local landowner Red Will Dannaher (Victor McLaglen). Dannaher takes an immediate dislike to Thornton, and will not allow his sister to marry him. Thornton assumes that Mary Kate will defy her brother, but she doesn’t- Irish tradition holds that her family must approve of any man she wishes to marry. She could not and would not marry Thornton without her brother’s permission.

The local Catholic priest, Father Lonergan (Ward Bond) and the village matchmaker Michaeleen Og Flynnn (Barry Fitzgerald) play a trick on Dannaher, and convince him that the wealthy Widow Tillane (Mildred Natwick) has a crush on Dannaher, and would gladly marry him if his sister were out of his home. Dannaher gives his permission for Thornton to marry Mary Kate. But after the wedding, he finds out that the Widow has no interest in him. Dannaher is furious, and declares that, although Thornton and Mary Kate are legally married, he will never pay the dowry that the groom is entitled to.

Thornton doesn’t care at all about the money, but to Mary Kate and all her neighbors, the dowry (or, as she calls it, “her fortune”) is extremely important. In her mind, the marriage is invalid until the dowry is paid, and she refuses to sleep with her husband until her brother pays the dowry in full.

Mary Kate and all the neighbors expect Thornton to stand up for his wife, and demand the dowry from Red Will Dannaher, even if it means having a fistfight. Thornton refuses to do so, insisting that it’s silly to fight over a relatively small amount of money. Mary Kate begins to lose respect for her husband, and the neighbors begin to think he’s a coward.

Only the local Protestant minister, Reverend Playfair, understands why Thornton doesn’t want to fight. A sports fan, Reverend Playfair realizes that, in America, Thornton was a heavyweight boxer who had killed an opponent in the ring. That tragedy made Thornton extremely reluctant to fight with anyone. Playfair tells him, however, that he may HAVE to fight to win back his wife’s love and respect.

Mary Kate, ashamed of her husband, gets on a train, intending to leave town forever. That’s the last straw for Thornton. He races to the depot, pulls his wife off the train, and drags her across the countryside to her brother’s farm.  Everyone for miles around hears of this, and races to the Dannaher estate to see the brawl they’re sure will ensue. Thornton forces Dannaher to pay the dowry money, which Mary Kate takes and burns (proving that the money itself never mattered to her- only the principle). She heads back happily to Thornton’s cottage.

Her husband and Red Will Dannaher get into a spectacular fight, and beat the tar out of each other for a long time, while everyone in the county watches. The two men bond during their slugfest, stop at a pub to get drunk together, and come back to Thornton’s cottage together, the best of friends.

Meanwhile, matchmaker Michaeleen Og Flynn can be seen taking Red Will Dannaher and the Widow Tillane for a horse and buggy ride, as they begin a very formal, traditional Irish courtship. 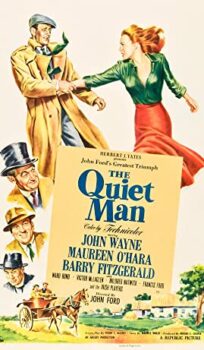