The suicide of his friend and battle Superior Finlay (Stellan Skarsgard) catapults Lomax (Colin Firth) to travel to Thailand, to the same place where his extensive torture at the hands of the Kenpeitai happened. Said camp has been converted into a museum, and Nagase (Hiroyuki Sanada) is its guide and caretaker; he was able to avoid getting prosecuted for war crimes but still lives with the memories of what he took part in. Lomax finds Nagase and engages with him in a confrontation that escalates from a harsh bberating for what the Japanese put Lomax through, to almost -but refusing to do so, at the very last minute- bashing Nagase’s arm with the same club that was used to submit Lomax to painful beatings, to locking him up in one of the same cages -now part of the exhibit- in which Lomax and his fellow British soldiers were put in. Out of the tremendous guilt he has felt over all those years, Nagase decides to atone by not resisting to these attacks on himself; while locked in the cage, he explains to Lomax that all Japanese were goaded into the idea that “the Empire would prevail and win the war, and they were indestructible”, only to eventually face the shame of the aftermath of the Empire’s defeat. He also commends Lomax for being as strong as he was and a survivor, and that Lomax’s mother must’ve been actually dead -Lomax, all along, fantasized about returning home to be embraced by his mom, but then faced the harsh reality of her being gone- and “so heard his cries of anguish, because, being alive, she couldn’t have from so far away”.

All throughout, these scenes are juxtaposed against the unsettling sequences of torture -beatings, starvation, waterboarding- a younger Lomax (Jeremy Irvine) was submitted to, under the suspicion of being a spy, due to a makeshift radio discovered in possession of the POWs, earlier in the film; said acts of torture were overseen by an also young Nagase (Tanroh Ishida), who kept taunting Lomax about being an honor-less coward. Lomax, eventually, comes to the realization that Nagase was as much of a victim of the manipulations brought about by the war as he himself was, frees Nagase off his captivity and, finally feeling at peace with himself, returns to his beloved wife Patti (Nicole Kidman), in Britain.

Later, both Lomax and Patti return to Thailand, where they once more have an encounter with Nagase; this time, however, Lomax hands him over a letter where he expresses his intention of completing letting go of his hatred against him -similar to a letter, heard in voiceover before, from Nagase to Lomax-. Both men tearfully embrace and apologize to each other, while a moved Patti watches from afar.

Title cards show that the two men stayed good friends until their respective deaths, months from each other, in 2011 and 2012. 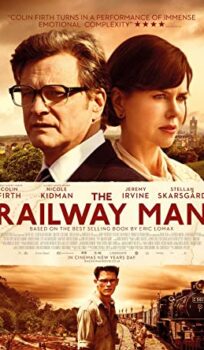