Submitted by Steve A

Edgar Allen Poe is coerced into helping the Baltimore Police solve a series of murders based on his stories.

During a re-creation of The Masque of the Red Death, Poe’s fiancee Emily is kidnapped, sending Poe into a frenzy to find the killer and his betrothed. As it turns out, the murderer is the typesetter at the newspaper Poe freelanced at. The man was a huge fan of Poe’s and part of the bargain that the killer had been making in his ransom notes was that Poe begin writing again, documenting the case as it unfolded. It’s projected pretty early on that the killer is somehow involved in the newspaper industry, as readership is up during the investigation, and Poe is churning out some great stories, but because the typesetter, Ivan, is kept behind the scenes, it’s a bit of a bait and switch when he’s revealed as the killer.

Part of Poe’s bargain to free his fiancee is that he will take his own life to save her, so when he confronts Ivan, he is told that he must drink a shot glass full of poison before her location is revealed. Poe does so, and scrambles to find Emily, which he does, mere moments before he dies. Ivan makes mention of going to France to track down Jules Verne, and Poe dies on a park bench, as he did in real life. 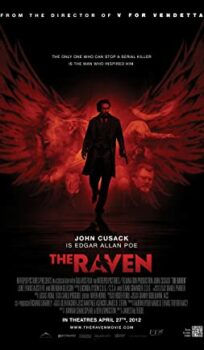