As the heist is underway, Karen McCoy (Kim Basinger) traps Jack Schmidt (Terrence Stamp) and his crew in the vault, leaving them to be arrested by police, in revenge for Schmidt giving her bad intel in her first attempt of robbing the bank (and believing Schmidt will either kill her or use her as a patsy when the job is done), which led to her arrest and 6 years in prison.

Karen along with J.T. Barker (Val Kilmer) return to Schmidt’s mansion and rescue Karen’s son Patrick from her corrupt parole officer. Karen steals 3 million from Schmidt’s safe, which was her real target all along.

As they are at the airport to flee, Karen realizes she can’t take Patrick with her and ruin his life. She calls her ex-husband to get him, thinking it is the right thing to do. However, she is horrified to discover that her ex is more concerned with money he believes she stole from the bank, not the well being of their child. As he tries to rob Karen, J.T. knocks him out cold.

J.T. finally forces Karen to admit to Patrick that she is his mother (her ex-husband told him Karen was dead) and the two of them happily embrace. Karen, Patrick, and J.T. board a plane to Rio and get away to start a new life with Schmidt’s 3 million. 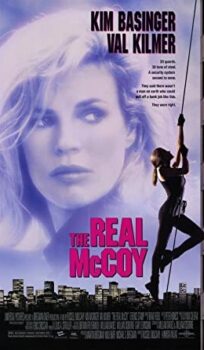