Short Version:
The killer in the red cloak was Rosemary (who is also the REAL Eveline). She is killed by Franziska who planned the whole Red Queen plot because she wanted the Wildenbruck estate all to herself. Franziska attempts to kill Kitty but she is shot by Herbert. Kitty is rescued by Martin, Herbert and the police but Herbert drowns in the rescue attempt.

Long Version:
Martin gets his hands on the will of Tobias which reveals the truth about the Wildenbruck family. Rosemary is a sister of Kitty and Franziska. Not only that, she is also revealed to be the real Eveline. The girl/woman from the flashbacks that we were lead to believe was Eveline was actually the daughter of poor parents who sold her. When they were children, Tobias switched the identities of the children and sent the real Eveline (now known as Rosemary) away to try to break the family curse. Franziska knew the contents of Tobias’ will all along and she wanted the entire Wildenbruck estate for herself. She thought that she deserved it all since she was the one taking care of Tobias at the end of his life.

It turns out that the girl that we thought was Eveline survived the accidental attack from Kitty at the lake. Franziska finds her alive and kills her. Since Franziska does not consider her a real member of the family, she doesn’t think that this woman deserves any of the family inheritance. Thus begins her plot to kill everyone named in the will so that she would get everything passed down to her.

Franziska tracks down the real Eveline, now living under the name Rosemary, and tells her of her true lineage as a Wildenbruck. She starts to mold her into a killer by introducing her to the legend of The Red Queen. With the help of a drug addict, she gets Rosemary hooked on drugs to make her easier to control. Under the influence of the drugs, Rosemary begins her killing spree as the cackling Red Queen.

Eventually, Rosemary gets scared of the murderer that she has become. Franziska kills Rosemary and takes things into her own hands, going after Kitty herself. She traps Kitty in a room in the castle and begins to flood it.  Having read the will, Martin confronts Franziska and she confesses everything. She tells Martin that she is sick of her husband Herbert and that she and Martin can be together. She is then shot by Herbert who overhears the tail end of the conversation. In the fray, Martin is stabbed in the chest. Herbert and Martin enter the castle and Martin is able to call the police for help. The police arrive and they open the door to the room in which Kitty is trapped. They rescue her but Herbert dies in the process by drowning in the water released from the room by freeing Kitty. Martin and Kitty, both alive, are driven off the from the scene in an ambulance. 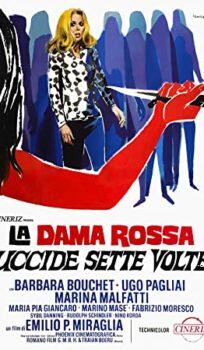