The killer is Kothoga, a chimera who is worshipped as a god by the Brazilian Zenzera Tribe. Whenever the tribe had to vanquish some enemies, they would take special leaves laced with hormones and give them to an animal, transforming it into Kothoga. Since Kothoga needed the hormones to survive, the tribe would stop feeding it the leaves and go into hiding, causing Kothoga to go out after their enemies and consume the hypothalamuses in their brains, since that part secretes hormones. After Kothoga consumed them all, it would die, and the Zenzera would emerge from hiding. Kothoga was killing people in the museum for their hypothalamuses, since it had no leaves to eat.

Later, after Margo (Penelope Ann Miller) gets a sample of its DNA, she discovers that Kothoga was once John Whitney (Lewis Van Bergen), the researcher sent to study the Zenzera. He unwittingly ate some of the leaves the night before his return to Chicago.

Shortly after Margo learns its identity in the lab, Kothoga attacks her, so she runs to one of the storage areas and knocks over all of the flammable liquids on the shelves. Then, she creates a mixture of chemicals that sets the liquids ablaze, in turn setting Kothoga on fire, and she jumps into the safety of a maceration tank while the liquids explode and kill Kothoga. 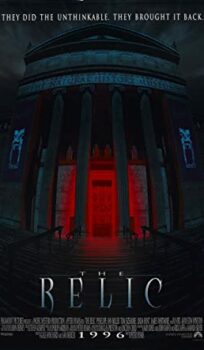