Bernard (voiced by Bob Newhart) and Bianca (voiced by Eva Gabor) help Penny (voiced by Michelle Stacy) locate the Devil’s Eye diamond in the pirate’s cave, and after a hellacious time in the cave get the diamond back up to Madusa (voiced by Geraldine Page). Evinrude (voiced by James MacDonald) makes it back to the home of Ellie Mae (voiced by Jeanette Nolan) and Luke (voiced by Pat Buttram) to pass the message that now was the time to strike at Madusa and save Penny, and all the swamp critters assembled there begin their run to Madusa’s ferry boat.

Madusa, meanwhile, decides to leave with the diamond, and she keeps Penny and her assistant Snoops (voiced by Joe Flynn) at bay with her shotgun in one of the rooms. Penny demands her teddy bear, which Madusa still has, but she tells Penny she’s taking it with her. As she backs out of the room, Bernard rigs a tripwire that knocks Madusa flat on her back, and the teddy bear rolls around, it’s back opening up to reveal that the Devil’s Eye was inside it. Penny grabs the teddy bear and runs off while the swamp critters attack Madusa and trap her pet alligators Brutus and Nero in an elevator. Two of the swamp critters, Deacon Owl (voiced by John Fiedler) and Deadeye (voiced by George Lindsey), set off Snoops’ fireworks to further distract her while Penny, Bernard, Bianca, and the other critters start up the swampmobile and take off with it. Madusa grabs the rope trailing off the end, being pulled along like a water-skier. The elevator keeping the alligators caged is blown up by a firework, and the gators fall in the water where they soon become Madusa’s skis. Penny turns the swampmobile hard, snapping Madusa’s rope, and Madusa is propelled into a large pipe on the now-sunken ferry. Snoops paddles away on a piece of wood while laughing at Madusa, and Penny and everyone else gets away while Madusa still clings onto the pipe, her alligators snapping at her heels.

It later shows Bernard, Bianca, and the rest of the Rescue Aid Society watching a news report, where it said the Devil’s Eye was now in the Smithsonian Institute, and Penny was finally adopted. When the news reporter talks to Penny, she thanks Bernard and Bianca for saving her. Evinrude then makes a surprise visit, carrying a piece of paper. Bernard & Bianca find out it is another call for help, and Bianca decides to volunteer again, dragging Bernard into it.

The last bit of the film shows the two taking off with Orville (voiced by Jim Jordan) in blizzardy weather, Evinrude along for the ride. 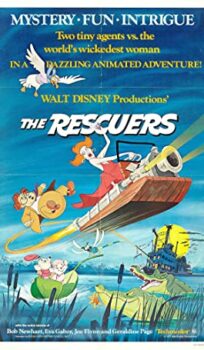