The Resurrection of Gavin Stone(2016)

POOPER
Gavin bails on the play to be a part of a new TV show, but he quits that when he learns he was only cast because of his bad boy reputation. He flies back to Masonville, where Kelly forgives him and he is back in the play. The play is a success, and Gavin sees his father in the audience. Gavin and Kelly begin a relationship, and he also wants to direct the next play.

LONG VERSION
While visiting his hometown of Masonville, Illinois, former child TV star Gavin Stone (Brett Dalton) gets in trouble with the law and is sentenced to 200 hours of community service in the form of helping maintain the local church. While serving the sentence, Gavin is forced to live in the home of his estranged father Waylon (Neil Flynn). On his first day at the church, Gavin sees parishioners auditioning for their upcoming Passion Play, and he asks Pastor Allan (D.B. Sweeney) if he could use some of his hours towards helping out with the play. After being told that only Christians can participate in the play, Gavin tells the pastor that he is one. Allan is surprised to hear that he is, so he allows it. Gavin then takes the stage, but before he can audition, he must give his personal testimony, which comes in the form of saying song titles with the word God or Jesus in them. Allan’s daughter Kelly (Anjelah Johnson-Reyes), who is directing the play, doesn’t want to cast Gavin because he is cocky. However, Allan tells her he is by far the best actor to audition, so she reluctantly gives Gavin the role of Jesus.

During the rehearsals, it becomes obvious to Kelly that Gavin knows nothing about the story of Jesus, despite his continued claims that he is a Christian. One night after rehearsal, Gavin accepts the invitation to join a few of the guys for a get-together hosted by former biker Doug (WWE star Shawn Michaels). Gavin learns from Doug and the others that Kelly has turned down every chance to go out on a date with a parishioner. They tell him that Jesus is the only man in her life. Since he is starting to have feelings for her, Gavin goes all out with the stereotypical Christian lifestyle to try to woo Kelly. He also starts to help with the production by giving acting tips and making suggestions to make the production “better”, but Kelly shoots down all of his ideas because Jesus was a humble man, and all of his suggestions make Him a spectacle. Allan then talks to Kelly, and suggests to her that she should listen to some of his suggestions because it’s not every year a Hollywood actor is in our little church play. The next day, she comes to church and sees Gavin speaking to one of the children in sign language. He tells Kelly he learned it for a film role years ago. Impressed, she tells Gavin that if he can seriously learn what Jesus is, much like how he learned sign language, then she’ll be more open to his crazy ideas.

With Gavin learning about Jesus and giving more realistic suggestions, the rehearsals go much better, and Kelly begins to warm up to Gavin. After a rehearsal, she agrees to go out with him, but not as a date. He learns from her that she was once engaged to the music minister, but she was dumped when he moved to Nashville to start his music career. Since then, she’s been concentrating on the church. Being a pastor’s kid in a small town, she feels that she has to live a perfect life or she will be rejected. Gavin says he can relate, but the rejection would come if he’s not living a typical Hollywood lifestyle. Now back at home, Gavin is starting to open up to his father, but Waylon is still skeptical of him. By this time, the 200 hours have been used up, and Allan signs the paperwork making Gavin a free man. He also tells Gavin that he has been a blessing to the church, and to his daughter as well.

The opening night of the play is just a few days away, and Gavin gets a call from the producer of his old TV show when he was a kid. He has the perfect role for him in his new show, but he has to fly out to Los Angeles to start shooting tomorrow. He accepts, and tells both Kelly and Waylon that he has to take this role or his career is over. He also tells Kelly that he isn’t a Christian, and doesn’t know why he said he was. Now in LA, Gavin begins to have second thoughts about bailing on the church play, especially after he is told that the only reason he was cast was because of his reputation as a bad boy. Realizing he made a mistake, Gavin quits the show and flies back to Masonville to try to make it up to everyone. He tells an angry Kelly that it was a mistake to walk out and says he’ll do whatever it takes to make it up. After she speaks to her father for advice, she tells Gavin that he is forgiven and he can play Jesus again.

It’s the night of the production, and the church has a full house. The show begins, and Gavin decides to discard the acting methods he suggested and decides to play Jesus the way Kelly wanted: with humbleness. He even ad-libbed a little to make Jesus and Christianity look even better. Between scenes, he tells Kelly he did that because he now believes. With the play over, the house lights come up and Gavin sees Waylon in the audience. The movie ends with Gavin and Kelly talking on stage after everyone has gone home. He tells her that he’s moving back to Masonville to live with his dad, and he wants to get to know Kelly better. He also wants to direct the next play about “Moses and the Ark”. 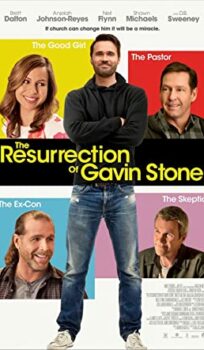