Short Ending:
Inspector Clouseau manages to evade attempts on his life byboth Col. Sharki and his own boss, Chief Inspector Dreyfus (who has been driven crazy by Clouseau’s antics). Charles Litton is not implicated in any wrong-doing, the pink panther diamond is returned to its museum, Dreyfus is committed to an insane asylym, and Clouseau’s legend grows as he is promoted to the now-vacant chief inspector position.

Long Ending:
Despite his past successes in recovering the Pink Panther diamond, Inspector Clouseau (Peter Sellers) still doesn’t have a clue, failing to stop, or even notice, a bank robbery that happens right in front of him. He is on the verge of being fired by Chief Inspector Dreyfus (Herbert Lom), who has been driven to the edge of sanity by Clouseau’s antics. Clouseau is quickly reinstated, however, when news comes in that the Pink Panther diamond has been stolen again. Inspector Clouseau’s assistance was specifically requested, and he is sent to the fictional country of Lugash to investigate the scene of the theft.

The culprit is thought to be Clouseau’s long-time nemesis, Charles Litton (Christopher Plummer in a role originated by David Nivens) aka the Phantom. The problem is, the Phantom has been retirted for years. Once Charles hears of the news, he travels to Lugash to figure out who has tried to frame him. Meanwhile, Inspector Clouseau flies to Britain and infiltrates Litton’s house in his telephone repairman “disguise.” Litton’s wife , Claudine (Catherine Schell), immediately sees through Clouseau’s ruse and feeds him false information that she will be meeting Litton in Switzerland, throwing him of Charles’ trail.

Meanwhile, Charles is making his way through the underworld of Lugash to find information on the theif. He is also contacted by Lugash special forces officer, Col. Sharki, who is convinced that Litton is guilty and will take him in, dead or alive. After watching surveilance video,Charles deduces who the true thief is and flees Lugash, not knowing that Col. Sharki is shadowing his every move. Meanwhile, Clouseau continues his investigation of Claudine who is vacationing in Switzerland, leaving great destruction in his wake and finally driving Chief Inspector Dreyfus insane.

Charles meets Claudine in Switzerland and states that he knows she is the thief, as he saw through her disguise on the surveillance video. Claudine admits she stole the diamond, but only so that Charles would not die of boredom due to his retirement. Meanwhile, Clouseau is instructed by Chief Inspector Dreyfus to arrest Claudine. Clouseau does not know that Chief Inspector Dreyfus has journeyed to Switzerland, rented a room across from Claudine’s and intends to take out Clouseau with a sniper rifle. Clouseau bursts into Claudine and Charles’ room, only to find that Col Sharki is about to murder them both in cold blood so he can be considered a hero and return the diamond himself. Through a series of comical events, Chief Inspector Dreyfus ends up accidentally killing Col. Sharki with his sniper rifle (thus saving Clouseau’s life) and he goes crazy, attacking random hotel staff before being subdued and placed in a mental ward. Charles and Claudine escape in all the confusion, and Clousseau is left with the Pink Panther Diamon, which he returns to the museum.

We flash forward, to find Charles once again engaging in heists with a smile on his facwe. The Pink Panther diamond is once again returned to the museum. Clouseau meanwhile, has been promoted to Chief Inspector until Dreyfus recovers, and revered as a hero. His newfound promotion does not stop his servant Cato (Burt Kwok) from attacking him in public as Clousseau had instructed him to do, and the film ends with Clouseau and Cato causing mayhem in a Japanese restaurant. The film closes with Dreyfus in a straight-jacket in a padded room, writing “kill Clouseau” all over the walls and floor of his cell with his feet. 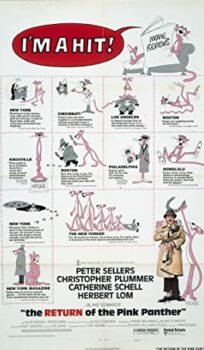