Pooper:
Glass makes it back to the settlement. He and Captain Henry track down Fitzgerald, who kills Henry before fighting with Glass. Once Glass has the upper hand, he incapacitates Fitzgerald and floats him down the river to the Arikara Chief, whose daughter Glass had saved from the Frenchmen. Glass continues to imagine the revenants (or ghosts) of his departed wife and son.

Long version:
Hugh Glass (Leo) is haunted by the revenant or manifested spirit of his wife, who was of the Arikara tribe, and indigenous Native American tribe that lived in North Dakota and fought with the American and French settlers. Glass’ wife was killed by an American soldier who Glass then murdered.

Glass guides a group of American pelt trappers through a northern part of the Louisiana Purchase accompanied by his son Hawk. When their camp is attacked by a wild Arikara tribe, less than half of the party manages to get away on a raft. Once they are safely away, Captain Henry decides that they should return to their settlement, despite losing all their pelts. While scoping out the forest, Glass is attacked by a mother grizzly bear protecting her cubs. Glass eventually kills her, but is critically injured and cannot walk. The party makes him a stretcher, but cannot carry him up the steep hills. Captain Henry chooses to let Glass die naturally and leaves Hawk to watch over his father along with Jim Bridger and John Fitzgerald, a greedy and vengeful American who was partially scalped by the Arikara. Fitzgerald is only staying because it means he will get $300 (the combined shares offered by Henry to the men willing to stay with Glass until his natural death and honorable burial).

While Bridger is getting water, Fitzgerald kills Hawk and buries him in the snow so that Bridger will think it was Arikara. Fitzgerald tells him that a hunting party is not far and that they should leave Glass. Fitzgerald buries Glass alive, but Bridger leaves behind a canteen of water for him. The story shifts from Bridger and Fitzgerald back to Glass, who eventually manages to crawl away from his shallow grave and in the direction of the settlement. Elsewhere, the Chief of the Arikara tribe that sacked the camp attempts to sell the pelts to a group of Frenchmen in exchange for horses to help the Chief find his daughter Powaqa. When Fitzgerald and Bridger get to the settlement, Fitzgerald warns him not to tell the Captain that they left Glass to die, as it would be a violation of their orders, meaning that Fitzgerald would not be paid. Bridger keeps quiet while Henry pays Fitzgerald his sum.

In his recovery, Glass sees the spirits of his wife and son, and occasionally flashes back to the day his wife was killed. Glass eventually meets a man of the Pawnee tribe who treats his wounds and provides him with shelter from a blizzard. When Glass wakes the next morning to find his friend hung from a tree, he tracks the killers to the French campsite. They are keeping Powaqa as a sex slave as payment for the horses they gave her father (unbeknownst to the Arikara Chief). Glass frees her and they escape on horses. The French chase Glass and his horse off a cliff, where Glass spends the night inside the horse’s carcass. When a Frenchman arrives at the American settlement, he is carrying the canteen Bridger had left with Glass. Fitzgerald realizes that his lies will become apparent, and steals the remaining money from Henry’s safe to escape to Texas, where he intends to buy land. Glass finally arrives at the settlement and is welcomed by Henry. Glass tells Henry that Fitzgerald murdered his son and forced Bridger to leave him for dead.

Glass and Henry go out on horseback to track Fitzgerald. At one point, the two split up. Henry encounters Fitzgerald and the two have a standoff. When Glass hears the two gunshots, he rushes to the location and finds Henry fallen from his horse, freshly scalped by nearby Arikara. Glass locates Fitzgerald and the two have a fight by a creek. When Glass gains the upper hand, Fitzgerald asks him what it’s like to get his revenge. Realizing why his wife’s revenant has been haunting him, Glass sees the Arikara chief downstream and says “Revenge is in God’s hands, not mine.” He puts Fitzgerald in the stream that goes down to the Arikara, who kills and scalp him. The Arikara pass by Glass on horseback, leaving him be as the Chief knows it was Glass who freed Powaqa. Glass sees the spirits of his wife and son, then looks into the camera as the screen fades to black. 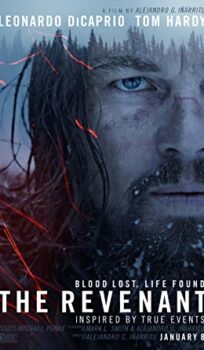