The book that Sadie the bar owner found is an unpublished, previously unknown manuscript written by Charles Dickens. In the flashbacks it is revealed that Dickens’ wife, who was slowly going insane, killed her younger sister out of jealousy since Dickens was interested in her. A police officer who was close to the wife was blackmailing Dickens that if he didn’t pay every year then the officer would say that Dickens was the killer. The year that Dickens’ wife finally died, Dickens refused to pay anymore and killed the police officer.

In the present, the killer is the head of the construction company, who has been killing people who got in his way of developing the area around the bar. Sadie refused to sell him the bar and got killed. Mike Sullivan (Vinnie Jones), a journalist, and Kate Merrill (Julie Cox), a police press officer, team up with a mysterious tramp (Derek Jacobi) to solve the murders. At a showdown at the Thames, the head of the construction company is killed by his henchman, who then commits suicide.

Although the tramp was shot to death by the head of the construction company the tramp mysteriously comes back to life. Mike calls the tramp “Mr. Dickens” and gives him back the manuscript. The tramp walks into the Thames with the manuscript while Mike and Kate watch. 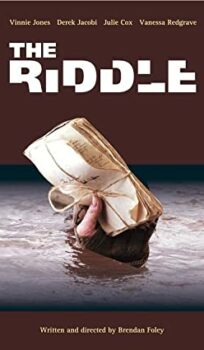