Short pooper:
The group of Gail (Meryl Streep), her son Roarke (Joseph Mazzello) and crooks Wade (Kevin Bacon) and Terry (John C. Reilly) manage to survive the Gauntlet in one piece. Shortly after, Gail gets the upper hand and kills Wade. Terry is arrested while Tom (David Strathairn) lovingly reunites with his family.

Longer version:
Gail has no other choice but to navigate into the dangerous Gauntlet, especially after she failed to prevent Wade from shooting and killing her old friend, Ranger Johnny (Benjamin Bratt), who wanted to stop them from bypassing the threshold prior to the beginning of the rapids. She reassures her young son Roarke that they will be alright and back in Boston soon, because “vacation is over”.

Although a prisoner of the two crooks, Gail somewhat manages to take the lead in the perilous crossing, since she had tried it many years prior and knew the route. Despite several close calls in which the group looks doomed, they overcome the Gauntlet and cross it safely, to which both Terry and Wade cheer lively. Meanwhile, Gail’s husband, Tom, who had been following them on foot through the mountainous path above the river -along with the family dog, Maggie, whom he found shortly after escaping from Wade, earlier in the film-, leaves a code painted in Sign Language -which Gail and Roarke were fluent on-, giving his wife cues to get ready to fight back. She positions the boat in a certain way on the water and that allows Tom to manually turn it over, causing everyone to fall overboard.

Tom and Wade struggle underwater, while Terry tries to attack Roarke and Gail beats him with a paddle, breaking his arm. In the confusion, Gail gets a hold of Wade’s gun and points it at him; he cowardly tries to talk her out of shooting him “because, if she does, she would spend the rest of her life trying to figure out if she had to, and there was no way for her to know”. She lifts the gun in the air and pulls the trigger, showing the gun to be seemingly empty; Wade then changes his attitude and orders Terry to kill both Tom and Roarke. While Wade is looking away, Gail frantically looks through the barrel, does find a bullet and sets it in place, while retorting back at Wade: “WRONG!! THERE WAS A WAY!!”. When he lunges at her, she shoots and mortally wounds him. He floats off as he dies, while Tom subdues Terry.

Shortly after, the authorities arrest and haul Terry away, while they escort Wade’s corpse. An officer questions Roarke about his experience, to which the boy answers he was confident that his mom would lead them all to safety. When asked what his father did, meanwhile, Roarke looks at him and Gail sharing a passionate kiss -a sign the experience drew them close again- and answers: “he saved our lives”. The film ends with the family and Maggie embracing together by the river. 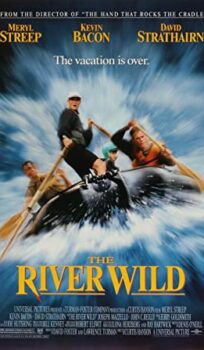