The teenager boy that the son (Kodi Smit McPhee) sees in one of the ruined towns as well as the dog that the Man (Viggo Mortensen) and the son hear barking while they are hiding in the fallout shelter both belong to a family that is following the pair as they journey along the road.

The Man is slowly dying, but he and his son manage to fend off cannibals, feed an old man (Robert Duvall), track down a thief (Michael Kenneth Williams) who steals their stuff  and survive a crossbow attack by a pair of frightened survivors.

The two reach the coast, which they find to be desolate. When the Man dies on the beach, the patriarch (Guy Pearce) of the family that’s following them and his wife (Molly Parker) convince the son to join their family.

The cause of the cataclysm that destroyed everything is never revealed, but we are led to believe that life will someday return because the son finds a live beetle on the boardwalk. 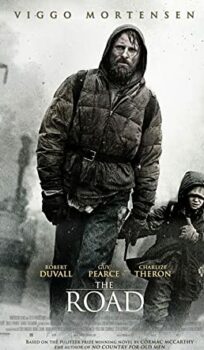