Mason (Sean Connery) and Goodspeed (Nicolas Cage) take out virtually the entire team of NAVY Seals by themselves.  Two rockets get launched, with no harm done, since Goodspeed manages to defuse the gas-depleting mechanism from them all.  General Xavier (Ed Harris) dies in a shootout between him and some of his men, when they form a mutiny against him after he starts getting cold feet about his plan.

Meanwhile, the President orders a massive attack with thermal plasma against Alcatraz to prevent the rockets to explode and cause the feared environmental massacre they would create.  At the same time, Goodspeed lights the green flares that indicate the danger has passed; however, the plasma is dropped and Goodspeed gets blown into the sea due to the explosion.  Luckily, though, the plasma hit far from where the hostages were held, and Mason swims along to rescue Goodspeed.

They both make up, and then Mason suggests Goodspeed to visit Fort Walton, Kansas, for his next vacation, and hands him over a piece of paper, which contains some instructions.  Goodspeed finishes reading it and realizes Mason has disappeared.  The FBI comes along to rescue Goodspeed and the hostages, and he tells a dissapointed Womack (John Spencer) that Mason had “vaporized”.

In the end, Goodspeed marries his pregnant girlfriend Carla (Vanessa Marcil), but at the same time, he uses the instructions provided by Mason to retrieve the mysterious microfilm mentioned earlier in the film, and then they both drive away, as the angered father chases them.  The final line of the film is: “Honey, do you wanna know who killed Kennedy?!”, and the credits roll. 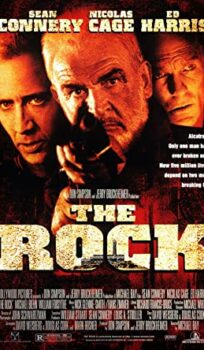