SHORT VERSION:
A.D.D. eventually gets scheduled to be the opening act for Vesuvius at an upcoming concert in Cleveland, courtesy of their arrogant manager David, but Fish wants no part of it. He ends up quitting the band when Curtis accepts the gig on the band’s behalf (which was brought on by David lying to Curtis by saying that Fish was banging his mother, Kim, in a plot to get Fish removed from the band). After being chided by Amelia and Josh for forcing Fish out, Curtis makes amends with him, and he successfully convinces him to play the gig. Before showtime, Fish runs into Vesuvius, and he ends up telling them to have a great show, putting the past behind him.

A.D.D. puts on a great performance, and afterwards, Curtis and Amelia arrange a date together, and Kim hugs Fish. When Vesuvius takes the stage, they are exposed as lip synchers within a minute into their set and get booed off of the stage. The audience then chants for A.D.D., so they decide to do an encore, but David stops them before they can, saying that it will make Vesuvius look bad and anger the record company, plus he didn’t care about what the crowd wanted. The band responds by firing him on the spot, and then they do the encore to another great ovation.

LONG VERSION:
Things begin to go sour for Fish (Rainn Wilson) and the rest of A.D.D. when they watch their first music video and notice that Fish’s face is obscured throughout it, and then when their manager David (Jason Sudeikis) tells them that they will be opening for Vesuvius at their next concert in Cleveland in honor of their induction into the Rock N’ Roll Hall of Fame. Fish flips out over this news and storms off, and Curtis’ (Teddy Geiger) mother Kim (Christina Applegate) goes after him to try to talk to him. The other band members refuse the gig out of respect for Fish, prompting David to suggest that they get rid of him, but they refuse that as well.

Meanwhile, Kim catches up with Fish and gets him to calm down by kissing him, and she tries to convince him to let go of his grudge with Vesuvius and play the gig, but to no avail. David witnesses the kiss, and he goes up to Curtis and lies to him by saying that Fish is banging his mother, hoping that this will get Fish removed from the band. At the band’s next show, Curtis announces that they will be opening for Vesuvius, which starts an argument between him and Fish and results in Fish quitting the band.

Fish returns to Cleveland, throws away his drumsticks, cuts his hair, and gets a miserable job at the company where his brother-in-law Stan (Jeff Garlin) works. Meanwhile, Amelia (Emma Stone) and Matt (Josh Gad) are none too happy about Curtis having forced Fish out of the band, nor are they happy with the unsuitable drummer that the record company had hired to replace him, and they let Curtis know of it. They then encourage him to straighten things out with Fish, saying that they need him, and if he told him straight from the heart how important this gig would be to the band, he would do it. Curtis tracks down Fish and does just that (in addition to some ego-stroking), and Fish decides to do the gig.

Before the show, A.D.D. crosses paths with Vesuvius, and Fish discovers that they now speak with faux British accents (except for the drummer who replaced him, who is a real Englishman). Fish tells them that, a week before, he wanted to inflict terrible pain on all of them the first chance he got, but now, all he wants to do is wish them a great show, finally putting the past behind him.

A.D.D. puts on a great performance, and afterwards, Curtis and Amelia arrange a date together, and Kim hugs Fish. Vesuvius then takes the stage, but a mere minute into their first song, the frontman Lex (Will Arnett) accidentally loses his microphone while the voice track continues and then starts skipping like crazy, revealing that the band has been lip-synching the whole time. The audience proceeds to throw garbage at them and boo them off the stage, and then they start chanting for A.D.D. Fish and company decide to do an encore, but David tries to stop them from doing so by saying that it would make Vesuvius look bad and anger the record company, plus he didn’t care about what the crowd wanted. The band responds by firing him on the spot, and then they do the encore to another great ovation. 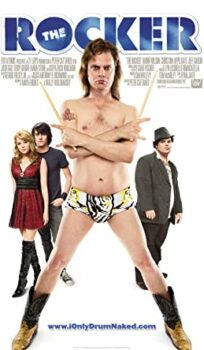