Cliff/The Rocketeer (Bill Campbell) does battle with Sinclair (Timothy Dalton) in the cockpit of the Nazi zeppelin, but as they are fighting, Jenny (Jennifer Connelly) tries to shoot Sinclair with a flare gun. She misses, and the flare starts a fire, which puts everyone in peril since the zeppelin is filled with hydrogen. Sinclair gets hold of the rocket pack, intending to escape with it, but he doesn’t realize that Cliff had already unplugged a bullet hole that was earlier made in the fuel tank, causing fuel to leak near the exhaust. As Sinclair is flying away, the fire of the exhaust ignites the fuel, causing the rocket pack to explode. Sinclair dies when his burning body crashes onto the last four letters of the “Hollywoodland” sign.

Cliff and Jenny get onto the zeppelin’s roof, and they profess their love for one another and kiss. Lothar (Tiny Ron) – who was earlier knocked out by Cliff in a fight on the roof but had regained consciousness – comes up to them to kill them, but the fire in the cockpit reaches the hydrogen, and the zeppelin starts exploding. They all run for the stern, but the safety harness Lothar has around his waist stops him from reaching it, and he gets burnt alive. Howard Hughes (Terry O’Quinn) and Peevy (Alan Arkin) come in on an autogyro and save Cliff and Jenny before the zeppelin is completely destroyed.

Some time later, Howard Hughes meets up with Cliff and presents him with a new Gee Bee racing plane with his name on it to commend him for his heroism. After he leaves, Jenny shows Cliff and Peevy the rocket pack schematics that she took from Sinclair’s villa while being held there by him. As she and Cliff kiss, Peevy remarks that with a few modifications to this design, he could build a better rocket pack. 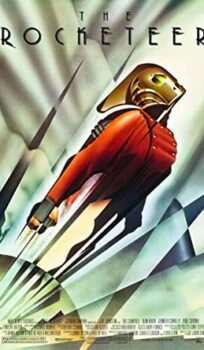