Pooper:
The children are soon all reunited on a bridge near the ranger’s station, but are cornered by a vicious wolf.  Spike arrives just in time to save the children and then their parents arrive to save Spike. The children are taken home and the adventure has brought the kids closer to Dil and each other.

Long Ending:
We open with a parody of the classic Raiders of the Ark opening scene, with twins Phil and Lil (voiced by Kath Soucie), Chuckie (voiced by Christine Cavanaugh) and Tommy Pickles (voiced by Elizabeth Daily) pretending to be adventurers (in reality, they are about 2-4 years old). We soon fade out of the imagination to see the babies were pursuing a tub of ice cream, although they are unsuccessful. Tommy’s house is full of people as his parents, Didi and Stuart, are hosting a baby shower as Didi is pregnant again. The scene is chaotic, especially since Didi’s father bought them a goat as a shower present. Tommy’s slightly older cousin, Angelica, spends her time feuding with neighbor Suzy and telling Tommy that a baby will ruin his young life. Of course, Didi goes into labor at the party and, soon after, Dylon “Dil” Pickles is born. Simultaneously, a train full of circus monkeys crashes in the neighboring forest.

Dil is a difficult baby, constantly crying and keeping his parents awake. Stu has almost no time for Tommy between taking care of Dil and working as an inventor. Stu has built a “Reptar”-brand baby carriage and hopes to enter it into a contest (Reptar is a popular Godzilla-type monster the kids like) held in Japan. Seeing that Tommy is feeling sad, he has a heart-to-heart with Tommy, explaining that Tommy is responsible for loving and caring for Dil just as he and Didi are responsible for loving and caring for him.

Stu’s father, as he is wont to do, falls asleep while watching the children. Thanks in part to Angelica, the kids and Dil climb into the Reptar and roll out the front door. The delivery man shows up, thinks that the goat is to be shipped to Japan, crates the goat up, and leaves. The parents assume the delivery man has actually packed up the missing kids and run off to find them. Angelica, discovering that Dil has her beloved doll, takes family dog Spike to track them down.

The kids end up rolling into the forest. The kids begin journeying to the ranger station, thinking that its a wizard’s house and that the wizard will teleport them home. They also meet the circus monkeys, who keep trying to steal Dil. Baby Dil makes the journey very difficult, finally causing Phil, Lil, and Chuckie to leave the Pickles boys behind. Tommy also tires of Dil and offers to give him to the monkeys, but at the last moment, accepts his responsibility and tries to rescue Dil. Eventually, Phil, Lil and Chuckie return to save the Pickles brothers. All the kids bond and they finally arrive at the ranger station, only to be cornered by a wolf on the bridge leading to the station. Angelica and Spike show up and Spike fights the wolf, with both tumbling off the bridge. Before Spike hits the ground, Stu swoops in on a pterodactyl glider he built and saves Spike,The kids are returned home.

We then watch as the kids, this time with Dil, again reenact the Raiders scene. Thanks to Dil though, they succeed in acquiring the ice cream. All five are now friends.

After the credits, Stu’s dad  is napping in the Reptar carriage when the goat, who has been returned, head butts the carriage, sending him out the door and down the street. 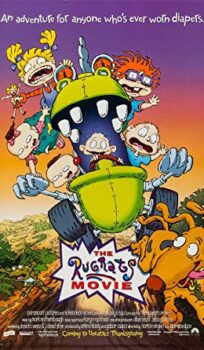