Longer Verson:
The flowers mimic sounds, which is why they sounded like a ringing cell phone. When distracted by the flowers mimicking Stacy’s voice, Matthias is choked to death by the weeds.

Later on, Stacy begins to grow weeds inside her body due to the cut on her knee. At one point, she attempts to cut them out herself, and goes mad, stabbing Eric in the chest. Bleeding to death from her own wounds, she begs Jeff to kill her too.

Jeff devises a plan so that at least Amy can get to safety. He carries her limp body to the bottom of the pyramid and distracts the natives long enough for Amy to get a running start to Dmitri’s Jeep. The natives shoot Jeff several times with arrows. Then, as he is being consumed by the pyramid weeds, he is shot in the head to end the suffering. Amy makes it to the Jeep, starts it up, and drives back to civilization.

The movie immediately cuts to Matthias’s friends approaching the pyramid, looking for him and Dmitri.

Jan adds the following from the UNRATED DVD VERSION:

In the end Amy is running towards the jeep, starts it and drives of.

Various closeups of her face (covered in blood) are shown, while she is looking backwards (trying to spot her followers) and driving a rough road at the same time. In the final close up of her face, suddenly traces of the “killer vine” show up around her right eye.

Then the screen goes black abruptly and some moments later the end credits start. 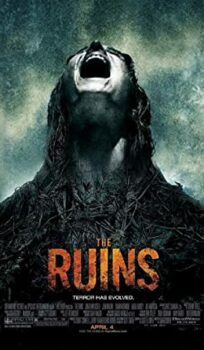