SHORT VERSION:
Sigvaldson – who is actually the Norse war god Tyr – slays Fenrir (and his vessel Martin) with assistance from Jacob, who was prophesized to assist him in the battle and who found and brought Tyr his axe. Fenrir’s spirit leaves Martin’s corpse and vanishes, Sigvaldson returns to the realm where he came from, and Ragnarok is averted.

LONG VERSION:
After Marla (Joan Severance), Sam (Tim Ryan), and Capt. Fanducci (Peter Riegert) narrowly avoid getting killed by Fenrir (Dawan Scott) at the former two’s apartment, the mysterious clockmaker Sigvaldson (Alexander Godunov) appears. Sigvaldson – who is actually the Norse war god Tyr – warns that Fenrir is growing stronger every day, and tells them that only he knows how to send Fenrir back to where he came from and that the Norse researcher Franag (Donald Hotton) has something he needs to accomplish this. Fanducci brings Sigvaldson before his superior, Chief Richardson (Lawrence Tierney), to tell him about Fenrir and how he poses a real threat, and Richardson decides to help after Sigvaldson performs some sort of hypnosis on him. Sigvaldson requests some supplies and a hundred of his men.

The next day, a hundred fully-armed cops come to the museum where the runestone is housed, and Marla, Sam, Fanducci, and Sigvaldson post themselves on the floor containing the stone and wait for Fenrir to show up. When night comes, Fenrir appears, and he tears through a lot of the cops on his way to the runestone’s floor. Meanwhile, Franag wakes up from his coma and tells his grandson Jacob (Chris Young) – who was sleeping nearby – that he must go to his theatre and break open the axe portion of a huge painting of Tyr there, for Tyr’s real axe is stored beneath it, and then get the axe to Sigvaldson so he can use it to kill Fenrir. Finally accepting that the dreams he had been having for so long were not just dreams (not to mention the fact that Sam had earlier found out that Jacob is actually prophesized to assist Tyr in slaying Fenrir), he does as instructed and then dashes to the museum with the weapon.

Fenrir gets to the floor where the protagonists are waiting for him and takes them by surprise, and he knocks Fanducci down hard. Sigvaldson orders Marla and Sam to flee and then starts fighting Fenrir. Marla and Sam soon stop running and decide to go back to get Fanducci, but before they do, Jacob shows up with the axe. The trio head back up and manage to get the axe into Sigvaldson’s hands, and eventually – during which Marla, Sam, Fanducci and Jacob follow Fenrir and Sigvaldson through a doorway to another realm and back – Sigvaldson slays Fenrir with help from Jacob, who delivers the killing blow. Fenrir’s spirit leaves Martin’s (Mitchell Laurance) corpse and vanishes, and Sigvaldson disappears back through the doorway to the other realm.

A while later, Fanducci takes a piece of the runestone as a souvenir of sorts and suggests to the others that they should not tell too many people about what they’ve seen tonight, and then he wonders what they are going to do about the stone now. The movie ends with Sigvaldson’s apprentice noticing Sigvaldson’s shadow moving past the main clock in his workshop, and the clock starts working again, no doubt signifying that Ragnarok has been averted. 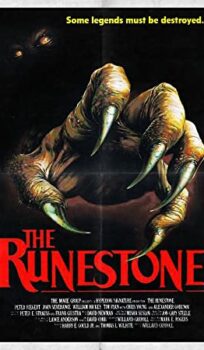