After killing almost all of the Stalkers, witnessing the deaths of Weiss (Marvin J. McIntyre) and Laughlin (Yaphet Kotto), and learning that last season’s winners were actually killed at the hands of the Stalkers, Richards (Arnold Schwarzenegger) and Amber (Maria Conchita Alonso) meet up with the underground resistance movement, and Amber tells them the uplink code for the network broadcasting signal that Weiss had her memorize before he was killed.

Richards and Amber then lead the rebels in an assault on the Network building, while resistance leader Mic (Mick Fleetwood) plays the real recording of the massacre Richards was framed for on the network broadcast signal, along with the real fate of last season’s winners that exposes Killian (Richard Dawson) and the Network as being a bunch of liars and that the government feeds the people these lies to control their way of thought. The Running Man audiences throw their support behind Richards as Richards and his team of rebels enter the Running Man studio.

The rebels succeed in their takeover, and though Killian tries to talk Richards out of harming him, Richards puts him into the game show’s rocket-powered sled and sends him down the tunnel leading to the game grid. However, there is no safety net at the end to stop the sled, so it goes flying into a billboard with Killian’s image on it, exploding on impact.

The last scene shows Amber and Richards kissing as the television audience cheers and chants for Richards. 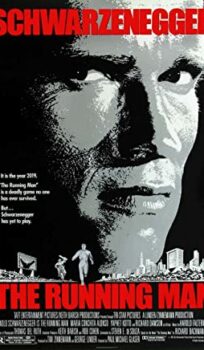