POOPER
Yakov, a.k.a. Dante, said a code word to Katya, letting her know that he had been compromised by the KGB and her life was also in danger. Barley told Ned in a note that he sold the list of questions to the Soviets in exchange for the safety of Katya and her kids, which ruined the joint MI6/CIA operation. Katya and her kids go to Lisbon to start a new life with Barley.

LONG VERSION
At an audiobook fair in Moscow, Soviet book editor Katya (Michelle Pfeiffer) is looking for Scott “Barley” Blair (Sean Connery), the head of a British publishing company. He blew it off, so she gives a manuscript to Niki Landau, another publisher who promises to give it to Barley. Despite being told not to read it, Niki does, and sees that it was written about the Soviet Union’s ability to wage nuclear war. Niki hands it over to MI6 (British Intelligence), and they begin to investigate the author, who is only known as Dante. They also bring in the CIA, led by Agent Russell (Roy Scheider), and brief them about the manuscript, and together they travel to Barley’s home in Lisbon and question him about Katya, but he doesn’t know her. But he does know Dante. A few months earlier, Barley was in the Soviet Union attending a writer’s retreat. While there, he met Dante (Klaus Maria Brandauer), a Russian writer who feels that his views of establishing peace with the West align with his. Before leaving, Dante made Barley promise to be a decent human being if Dante decides to become a hero. Barley is confused by the request, but he agrees to the promise. After they finish questioning Barley, both MI6 and the CIA want to use him to get more information from Dante, and how Katya is involved in all of this. After receiving a crash course in being a spy from MI6 agent Ned (James Fox), who runs the Soviet division of MI6 (a.k.a. The Russia House), Barley travels to the Soviet Union.

He meets with Katya to set up a meeting with Dante, but Barley soon becomes smitten with the beautiful Soviet book editor. While sightseeing, Barley begins to ask her questions about her life as well as some questions predetermined by MI6. Katya confirms to Barley that Dante’s real name is Yakov Saveleyev, a high-level Soviet physicist who works in the Soviet nuclear weapons program, and she knows Dante because he was a childhood friend and lover. However, when she begins to ask Barley about his life, he lies to her when he says he’s not a spy. She arranges a meeting between Barley and Dante, and once they meet, Barley tells Dante that the manuscript is in the hands of both MI6 and the CIA. Dante feels betrayed, but Barley is able to convince him that the manuscript can still be published, and is even able to get another volume of the manuscript, which he promptly turns over to MI6. The manuscript basically says that the Soviet Union’s nuclear weapons program is much less of a threat than previously believed. When Agent Russell gets his hands on it, he figures that it means the buildup of arms over the years by the USA wasn’t necessary, which would be bad news for the CIA’s top customers: the weapons industry. Meanwhile, Barley is spending much of his time in the Soviet Union with Katya, and it’s obvious they are falling for each other.

After he leaves the Soviet Union, the CIA takes Barley to one of their safe houses and interrogates him, and Agent Russell’s boss Director Brady (John Mahoney) and US Army Colonel Jackson Quinn (J.T. Walsh) are asking him about the authenticity of the manuscripts as well as where his loyalties lie. Convinced that he is on their side, and that the manuscripts are for real, both MI6 and the CIA prepare a list of questions they call “the shopping list”. These questions are given to Barley to ask Dante to get as much information as they can from him. Now back in the Soviet Union, Barley immediately seeks out Katya. He professes his love to her, then tells her that he is a spy. She loves him too, and she tells him that Dante has been acting differently lately, and she fears that the KGB may be on to him. She also reveals that shortly after his meeting with Barley, Dante entered the hospital with hepatitis. While out with Katya and her kids, Barley notices that they are being followed, and he begins to think the KGB may be on to her as well. Katya gets the call from Dante, and despite his illness, the meeting between Barley and Dante will go on. That night, Barley and Katya attend a book fair, and he pulls aside a Soviet book buyer and whispers something in his ear.

The time has come for the meeting, and just before he leaves, Barley gives a note to one of the agents working with him with the instruction to give it to Ned if things go wrong. At this time, Ned starts thinking that the Soviets know about the meeting and will try to steal the list to learn what the Brits and Americans know. He also thinks Barley may sell them the list to get out of any trouble he would be in. Agent Russell disagrees and orders the mission to continue. Under surveillance by both MI6 and the CIA, Barley goes to meet with Dante, bringing the shopping list with him. He goes into the building where the meeting is to occur, but he never emerges. 7 hours later, Russell admits Ned was right and their joint operation has been ruined. We next see Barley meeting with Soviet Intelligence agents, and he is doing exactly what Ned feared he would do. Barley also learns that Dante died of hepatitis. Upon returning to The Russia House, Ned sees the note from Barley. In the note, Barley says that when Katya spoke to Dante, he used a code word that let her know that the KGB did know about him and her life was in danger as well. Barley also figured out the only reason they weren’t picked up by the KGB at that point was that they wanted the list. The person he spoke to at the book fair was a KGB agent he saw earlier, and he told him to set up a meeting with his bosses. He says he sold the shopping list to them in exchange for the safety of both Katya and her kids from a previous marriage. He admits this wasn’t a nice thing to do, but it was the decent thing to do, so he kept his promise to Dante.

The movie ends back in Lisbon, with Barley welcoming Katya and her kids, and they start their new life together. 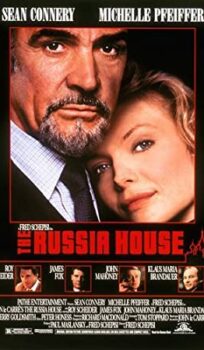