After having a one night stand with Emma, Templar steals the formula but Tretiak  claims it’s incomplete and doesn’t want to pay Simon for the job.

Tretiak’s henchmen try to kill Simon in London but he escapes to Moscow and get the payment from Tretiak himself.

Meanwhile, Emma also discover Templar is a wanted international thief who uses the names of Catholic saints as aliases and so tracks down Simon in Moscow and confronts him about the theft and his betrayal before the Russian police arrest both of them.

Tretiak wants Emma to complete the formula, but while they’re being brought to Tretiak’s mansion they manage to escape and Tretiak orders to kill Simon and bringEmma alive.

Emma tells Simon the formula is completed, but she also has to discover the way itworks matching all the pieces. Simon wants to put Emma safe in the American embassy, so they try to get in through an underground sewer, but they can only reach an exit next to the front doors.

Tretiak’s son Ilya (Valery Nikolaev) and his men are outside the embassy waiting for them. Simon gets caught as a distraction while Emma safely makes it to the embassy. Once again Simon escapes making Ilya’s car explode.

As the formula won’t work, Tretiak sells it to Russian President Karpov to frame him for wasting billions on useless technology and so use this fallout to installhimself as President. Emma finally completes the formula and Simon delivers it to Tretiak’s physicist Dr. Lev Botkin (Henry Goodman) and asking himfor a miracle, Dr Botkin sets the cold fusion reactor to work that night.

Simon infiltrates the President’s Kremlin residence and informs him of Tretiak’s conspiracy. Then they’re led to a gathering in Red Square where Tretiakhimself makes public accusations against Karpov, but the cold fusion reactor workssuccesfully and Tretiak is exposed and arrested. He is also guilty for the heating oil shortage.

Emma and Simon begin a relationship. Emma also presents her cold fusion formula to the world at a news conference in Oxford University. Simon attends the conference in disguise and realizing there are police agents looking for him, avoidsbeing captured escaping in his car.

While he is driving away, a halo appears round is head making him look like a true saint. A news radio broadcast reports that $3 billion was recently donated to the Red Cross, Salvation Army and the United NationsChildren’s Fund and also that Dr. Botkin is helping to set an organization to develop the cold fusion technology. 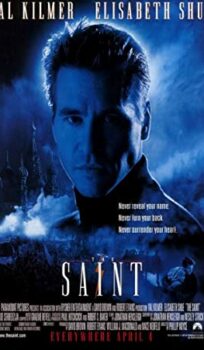