The crew of the gunboat U.S.S. San Pueblo (nicknamed “The Sand Pebble,” thus its crew, Sand Pebbles), are caught far inland during a revolution between nationalists and communists in 1920s China.

The missionaries, however, don’t want to leave — they naively believe their renunciation of all human nationality will keep them safe from the approaching Bolsheviks. They’re proved wrong as the idealistic pastor is gunned down.

The outnumbered landing party are trying to get the remaining missionary (Candice Bergen) to freedom when the San Pueblo’s captain is killed. This leads Holman to cover for the rest with an assault rifle.

After they escape, Holman is mortally wounded.  His dying words express his bafflement at the whole situation. The last shot is of the ship sailing away from China. 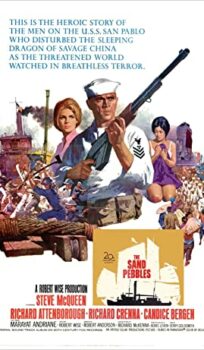