This film is a character study of the members of a dysfunctional family.

When the movie opens we are in Arizona and we meet two elderly people, a man and a woman. There is also a male nurse who has been hired to care for only the elderly lady. The elderly man is Lenny Savage. After being chastised by the male nurse for not flushing the toilet, Lenny goes into the bathroom and writes PRICK on the bathroom wall with his own feces. A call is placed to his daughter, Wendy Savage (Laura Linney), who lives in NYC to let her know that she may need to check on her father because of his behavior. Wendy is a struggling playwright, applying for grants and trying to get a play produced. Also, Wendy is having an affair with a married man that lives in her building.

Shortly thereafter the elderly woman passes away and her family is anxious to sell the house. Wendy and her brother John Savage (Phillip Seymour Hoffman) are already on their way to Arizona to check on their father because of the feces incident. Once they arrive they the elderly woman’s family let’s them know that they need to move Lenny out of the house. They are also informed that their father is in the early stages of dementia. Neither of them has had contact with their father for years, as such they aren’t sure where he should go. We also learn that he didn’t treat them that well when he was in their lives. Apparently, Lenny physically abused John. Around this same time John finds out that his longtime girlfriend has to return to Poland because her visa is expiring.

They decide to put him in a nursing home in Buffalo, which is where John works as a college professor. They visit him regularly, although they can’t really form a bond with him because of the dementia. After a couple of months in the nursing home Lenny passes away.  Wendy returns to NYC and gets an off off off Broadway production of her play, which is based on the lives of the Savages, and breaks up with the married man. John then heads to Poland for a conference and with the hope of getting his girlfriend back. 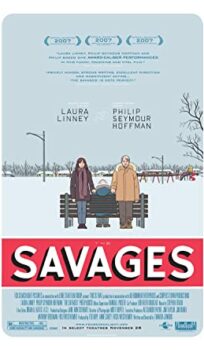