Sir Percy Blakeney (Leslie Howard) is a English aristocrat who leads a band of his peers (the League of the Scarlet Pimpernel) into France during the French revolution, attempting to spirit out of the country the potential victims. He is married to a beautiful French actress Marguerite (Merle Oberon). Their marriage is a chilly one, she thinks him a brainless idiot because of the fop he pretends to be lest people guess his identity, and though she remembers the man she originally married as being different, she has no explanation for his sudden change. Percy for his part is still madly in love with her, but she denounced an entire family to the guillotine (the youngest son of the family fell in love with her and the angry father had her put in prison as a prostitute) and he does not trust her to not give away his secret.

Citizen Chauvelin (Raymond Massey) is dispatched by the French government to uncover the Scarlet Pimpernel and he turns to Marguerite – married to one of the richest men in England, and an old flame of his. When she refuses to help, he blackmails her with the information that her brother Armand is in the League, and if Marguerite does not help, he will be executed. Marguerite agrees and helps Chauvelin steal correspondence between the Scarlet Pimpernel and one of his men. However, Marguerite betrays Chauvelin and confesses to Percy what she has done, pleading with him to help her save her brother. She also reveals that it was Chauvelin who betrayed her trust all those years ago and denounced the family.

Percy leaves for France to help Armand. Chauvelin follows, knowing who he is. Marguerite figures out Percy’s identity and follows after him, trying to warn him of the trap that awaits. They are both captured by Chauvelin, but when Percy is taken out in front of a firing squad, it turns out that his men have reached them in time, and it is Chauvelin who is in turn captured. Percy and Marguerite escape back to England, once more in
love. 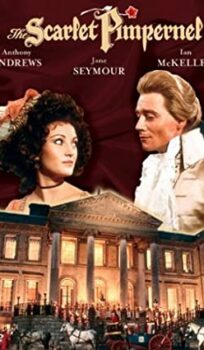