At the hospital (that was once a school) Dr. Amy Wintercraig (Megan Drury) works at, several children admitted to this place seem to die after lapsing into a coma or lose consciousness.

For the past two years, she has been caring for her comatose son David (Morrison Gammon) since he was resuscitated after accidentally drowning. However, her superior, Dr. Peter Masuta (Nicholas Hope), as well as other colleagues, have decided that since there has been no change in status they are taking him off life support. Desponded she slashes her wrists, only to wake up in a disused school that houses the souls of children who’ve died in the hospital and shields them from ghosts called Weepers who try to break into the place to add the child souls to their collective as well as corpse-like Hungrys who live beneath the school and travel up trying to feed on the spirit kids.

As she sets up about searching for her son’s lost soul, hoping to reunite it with his body, she discovers that this limbo way station had once been a peaceful welcoming place, but has now been invaded by demonic Zack (Will McDonald) who has twisted this state of existence into his own nightmarish playground, enslaving the spectral children and adding to their numbers by preying on the souls of admitted children to the hospital as they hover between consciousness and sleep, punishing them severely if they show any form of sorrow, happiness or defiance such as weeping, singing or swearing outbursts.

After torturing and imprisoning Amy, she is rescued by Timmy (Jack Ruwald) and Becky (Alexia Santosuosso) and from them discovers that Zack managed to escape into this netherworld because of the state David is in hovering between life and death, thanks to Amy keeping him alive even though he’s brain dead.

On finding David’s soul has been imprisoned in the walls by Zack, she descends into the basement where the Hungrys dwell along with the ghost kids who defied Zack. After encountering David stranded reliving the memory of his drowning, which occurred because his parents were too busy arguing to pay attention to him, she frees him from the walls but must face saying goodbye to him as he can no longer return to his body.

In a final confrontation with Zack, she manages to overcome him, thanks to one of the changed kids, and sends him burning back to hell, she then leads the hungry’s away from her son and the other kids as they escape, only to be resuscitated, finding herself in her son’s room, his bed now empty. Back in the limbo waystation, her son reunites with the now freed spirit children, with the refuge returning to the tranquil state it was before Zack invaded. 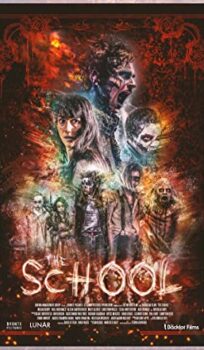