SHORT VERSION:
Mathayus, Cassandra, Arpid, and Philos end up at a hidden settlement under the command of Balthazar, and after Mathayus defeats Balthazar in a fight, he grants the quartet sanctuary. However, after Cassandra has a vision later on of Memnon and his army destroying the village and recapturing her, she decides to sneak away back to Memnon to spare the village this fate. After Mathayus discovers that she is gone, he heads to Gomorrah to save her, and he is accompanied by Balthazar and his warriors in addition to Arpid and Philos.

Mathayus and company get into Gomorrah, and Mathayus sneaks up to the throne room in Memnon’s castle while Balthazar and his warriors battle the guards and Arpid and Philos head down under the castle to destroy its foundation stone with Philos’ explosive powder. In the end, Balthazar and his warriors effectively battle the guards (and Balthazar also slays Takmet), Arpid and Philos blow up the foundation stone, and Mathayus rescues Cassandra and defeats Memnon in battle. Memnon then dies in the fires of the explosion. Mathayus is subsequently declared the new king – the Scorpion King (a title given merit by how he earlier survived an attempt on his life by one of Memnon’s henchmen with an arrow smeared with scorpion venom and blood. He was cured of the venom, but the blood remained in his veins, and always would).

Balthazar returns to his settlement and bids Mathayus a fond farewell, and Cassandra tells Mathayus that she sees a time of great peace and prosperity ahead, though it won’t last (foreshadowing the prologue of The Mummy Returns). Mathayus tells her that they will make their own destiny, then kisses her to close out the film.

LONG VERSION:
While seeking refreshment at an oasis, Mathayus (Dwayne Johnson), Cassandra (Kelly Hu), Arpid (Grant Heslov), and Philos (Bernard Hill) are ambushed by a band of rebel warriors and brought to their hidden settlement, which turns out to be under the command of Balthazar (Michael Clarke Duncan). Since Mathayus had an exchange of insults with him back when they first met, Balthazar initiates a fight with him, and Mathayus wins but spares Balthazar’s life. Balthazar tells him that Memnon (Steven Brand) will follow him here and he will stop at nothing until he reclaims Cassandra, but Mathayus enlightens him as well as the other settlers to the fact that Memnon will stop at nothing once he has her, and no matter how long they all hide here, in time Memnon will find it and lay waste to everything and everyone.

Balthazar grants Mathayus and his companions sanctuary, but that night, Cassandra has a vision where Memnon’s forces have set the entire settlement ablaze and slaughtered all of the people in it, and she herself is recaptured by Memnon. She goes to Mathayus and tells him of what she just saw while also admitting that not all of her visions are 100% certain, and when he pledges that Memnon will die by his hand, she has another vision of him being beaten by Memnon and then apparently slain with an arrow shot by one of his archers. She tells Mathayus that he is destined to die if he faces Memnon, but Mathayus replies that he will make his own destiny. He and Cassandra then sleep together, but later on, Cassandra secretly leaves on Mathayus’ camel to return to Gomorrah and to Memnon in order to keep the village safe. Mathayus awakens at dawn and sees that both Cassandra and his camel are missing, so he tells Arpid and Philos that he is heading to Gomorrah to save her. However, when he attempts to use Balthazar’s horse as his means to travel there, Balthazar halts him, and after he explains why he is leaving, Balthazar decides that he and his band of female warriors will join him in his rescue plan.

Cassandra arrives at Memnon’s palace while a pre-battle feast is going on, placating Memnon’s soldiers since there were rumors going around that she had left his side. Memnon declares the feast over and he and Cassandra go into his private chambers, but before they do, he orders Takmet (Peter Facinelli) to fortify the palace guard. While this goes on, Mathayus, Balthazar, and their allies get past the front gate after taking out all of the guards there, and while Mathayus scales a wall of the palace in order to sneak into Memnon’s throne room, Balthazar and the others go to the courtyard and break open an entrance to a secret passage under the castle, and Arpid and Philos go down it with some bags of explosive powder that Philos perfected while Balthazar and his warriors battle the guards once they get spotted by them.

After telling Cassandra that he senses that she isn’t herself and believes her powers have diminished, Memnon decides to test the strength of them by putting four cobras into six urns and having her pick which two urns don’t contain them. When she has trouble picking the second empty urn and gets accused by Memnon of being weak, she sticks her hand in an urn and takes a cobra out, then tells Memnon that she has seen his real fate and its time has come. Just as Memnon begins to threaten her life, Mathayus suddenly jumps him from behind, and they begin to clash swords. Meanwhile, Takmet joins the battle in the courtyard and goes straight in Balthazar’s direction after the guards push him into the castle, and Arpid and Philos find the castle’s foundation stone and set the powder bags at the base of it.

Balthazar’s battle with the guards spills into the throne room, and as he and Mathayus start slaying them, Memnon orders his guards to kill Cassandra, so she takes up a sword and combats them as well. Unfortunately, Memnon soon seizes her and takes her outside onto the terrace, and Mathayus follows. Cassandra tries to overpower Memnon and gets knocked out, and Mathayus and Memnon continue their fight. Takmet then attacks Balthazar, but Balthazar quickly pins him down and fatally impales him with his own spear, avenging the death of Takmet’s father Pheron, whom Takmet had betrayed and murdered in exchange for becoming an ally of Memnon.

Memnon eventually gets the better of Mathayus and disarms him, but Mathayus uses his strength to relieve Memnon of his swords and they start fighting hand-to-hand. Cassandra regains consciousness and spots an archer coming out and aiming his arrow at Mathayus, like in her vision, but when she attempts to shield Mathayus, he puts her out of the way and takes the arrow in his back. Meanwhile, Arpid and Philos are caught by the guards before they can light the powder, Balthazar finds himself facing a large amount of guards alone, and Memnon’s soldiers arrive to deal with Balthazar’s warriors. When the archer sees Mathayus regaining his footing, he moves in to stab him and finish him off, but Cassandra slays him before he can. Mathayus then spots his bow on one of the tables, earlier taken from him by the women in Memnon’s harem, and he pulls the arrow out of him and loads it into the bow. Memnon sees this and readies his swords to deflect it, but being exhausted from the battle, the arrow slips through his defense and hits him, and the force of it sends him flying off of the terrace. Arpid gets free of the guards and ignites the powder, causing a huge explosion that wipes out all of the guards, and Memnon becomes engulfed in the flames as he falls and gets burned to death. Balthazar gets into an alcove to avoid being incinerated, Arpid and Philos get out of the passage in the nick of time, and the blast halts the advance of Memnon’s soldiers. Everyone sees Mathayus high above with Cassandra, and they kneel and proclaim him as their new king – the Scorpion King (a title given merit by how he earlier survived an attempt on his life by one of Memnon’s henchmen with an arrow smeared with scorpion venom and blood. He was cured of the venom, but the blood remained in his veins, and always would).

Some days later, Balthazar and his crew leave Gomorrah to go back to the settlement. Mathayus offers him a chance to stay, but he refuses, citing his need to look after his own people, and they bid each other a fond farewell. Cassandra tells Mathayus that she sees a time of great peace and prosperity ahead, but it is not destined to last forever, such is the destiny of all kingdoms (foreshadowing the events detailed in the prologue of The Mummy Returns). Mathayus replies that they will make their own destiny, and then they kiss 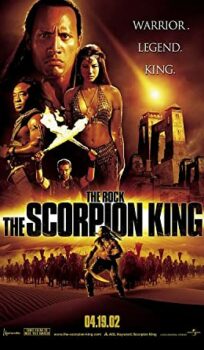