Ethan Edwards (John Wayne) and his half-Cherokee nephew Martin (Jeffrey Hunter) spend more than a decade looking for their niece Debbie, who had been kidnapped by a Commanche chief called Scar.

Debbie was a little girl when she was kidnapped, but is a teenager now, and has been made a bride of Scar. In the beginning, Ethan was determined to rescue his niece and bring her safely home, but as time goes by, Ethan becomes more and more convinced that Debbie has adapted to life as a Commanche woman and has “turned Indian.” Ethan hates Indians, and Martin becomes convinced that Ethan will kill Debbie if he ever finds her, rather than let her live as a Commanche.

Martin finds where Scar has been keeping Debbie (Natalie Wood). He kills Scar, and tries to rescue Debbie. Ethan tracks them both down, scalps Scar, then chases Debbie down. Though we fear Ethan will kill Debbie, he embraces her, and takes her home.

There is much celebrating when Debbie is returned to her family, but Ethan doesn’t join in the celebrating. He lingers by the doorway while everyone else makes merry, then walks out of the house, and heads into the wilderness. Ethan is not a man who can ever settle down, or enjoy a peaceful happy life. 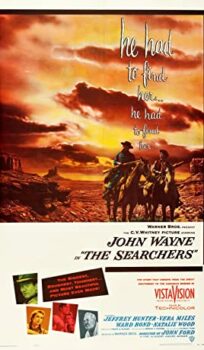