The Secret Life of Walter Mitty(2013)

Walter (Danny Kaye) spends much of his time daydreaming about things that aren’t real. Walter’s mother, fiancée, and boss all view Walter as a bumbling goof-off.

Walter meets Rosalind (Virginia Mayo) who is very real. Rosalind believes she is working with her uncle, Peter Van Hoorn (Konstantin Shayne) to recover missing Dutch jewels, when, in fact, Van Hoorn is an imposter. Van Hoorn and his henchmen work to discredit Walter as he and Rosalind gets closer to the truth and use Walter’s history of daydreaming against him.

On the day Walter is to get married, he leaves his fiancée at the altar to make one final effort to find and rescue Rosalind. He does so and stands up to those close who are close to him.

Walter marries Rosalind and is promoted at work. 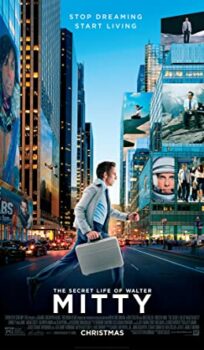