Pooper:
Though the Vikings destroy Kell, Brendan escapes with the pages of the book. Over the years, Brendan finishes the book. He returns to the remains of the abbey as an adult and presents the book to his uncle as the Book of Kells.

Long Ending:
This film is a fantastical account of the creation of the real life manuscript named The Book of Kell.

Brendan (voiced by Evan McGuire) is a young boy living in an abbey called Kells. The abbey is run by his uncle, abbot Cellach (voiced by Brendan Gleeson). The abbot is obsessed with building an impenetrable wall around Kells to keep out the Viking invaders that have been ravaging Ireland. All residents are prohibited from venturing outside the walls of the abbey.

One day, a monk named Aidan (voiced by Mick Lally) arrives, having fled a town destroyed by Vikings. He is an illuminator – a monk who illustrates religious texts. Aidan has with him a gold-bound illustrated religious book that has been worked on by a number of monks, including himself. He believes that completing the book is far more important than building the walls of Kell. Aidan strikes up a friendship with Brendan and begins training him to be an illuminator (an illustrator for the book). Cellach (a former illuminator) disapproves, believing that such fanciful pursuits will lead to the people of Kell being slaughtered by the Vikings.

Aidan convinces Brendan (accompanied by Aidan’s cat) to venture out of the abbey and into the woods to find materials needed to make more ink. The pair are attacked by a group of wolves, but then saved by a fairy named Aisling (voiced by Christen Mooney). She is the queen of the forest and has superhuman physical strength and magical powers despite looking like a child. She and Brendan strike up a friendship, and she helps him gather materials to make ink. They also stumble across the lair of an evil entity named Crom Cruach, who destroyed all of Aisling’s family before being trapped in his lair.

Angry with Brendan’s continued disobedience, abbot Cellach locks his nephew in a dungeon until he agrees to abandon his illumination training with Aidan. However, Aisling sneaks in and breaks Brendan out in secret. Aidan tells Brendan that he used to possess one of the eyes of Crom Cruach, which allowed him to see the spiritual world and incorporate it into the book. But the eye was destroyed by the Vikings. Brendan faces his fears and goes into Crom Cruach’s lair. He defeats the entity in battle and takes his other eye. Now in possession of the eye, Brendan’s illumination prowess surpass even Aidan’s. Brendan begins finishing the book and the residents secretly spend time admiring his work. Cellach eventually discovers Brendan has escaped, rips a page out of the book after dismissing it as garbage, and locks Brendan and Aidan into the scriptorium where they have been working on the book.

Later that day, the Vikings arrive and launch an assault on Kells. They manage to burn down the gate and overrun the abbey. Realizing his wall was useless and all his planning was in vain, abbot Cellach attempts to get to the scriptorium to free Brendan and Aidan, but he is stabbed and shot with an arrow before he can make it. He watches as the Vikings burn down the scriptorium and slaughter many of the residents of Kells. Believing almost everyone dead after the Vikings depart, Cellach and his servant retire to the tower (the only remaining structure) to live the rest of their days in shame.

Brendan, Aidan, and Aidan’s cat, however, managed to escape the scriptorium and flee into the woods. They are found by the Vikings who rip the gold cover off the book but leave behind the pages. The Vikings are about to kill the captives when Aisling leads wolves in a successful attack on the invaders. Brendan collects the pages and he and Aidan leave the area. Brendan continues working on the book over the years, finishing it just before Aidan passes away of old age. The now-grown Brendan and Aidan’s cat then journey through the country, using the book to bring hope and joy to the people of Ireland.

Brendan and his cat eventually returns to the woods of their youth where theu once again see Aisling (who hasn’t aged at all). She leads them to the ruins of Kells. Brendan enters the tower and finds his uncle still alive. Callach tearfully apologizes to Brendan and acknowledges that the book was far more important than the walls he built. Callach also shows Brendan that he kept the page he had torn out of the book and that it was the only thing that brought him comfort over the years. Brendan forgives Callach and then shows him the book. Callach weeps at the beauty of the tome as Brendan tells him that the work is known as The Book of Kells. 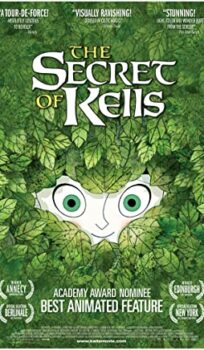